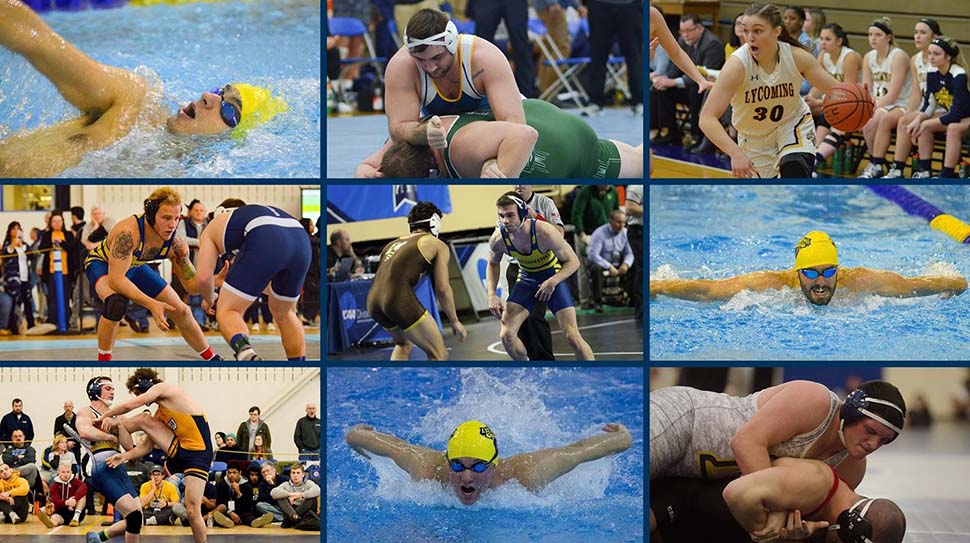 The Warriors had a record five wrestlers and three men's swimmers earn the accolades along with women's basketball's junior Kayla Kline (Mifflinburg, Pa./Mifflinburg).

A national title at 285 pounds to highlight a record-breaking career helped Wesneski earn the college's top male athletic honor. The MAC Wrestler of the Year, the corporate communication major finished 28-1 overall during his senior year, reeling off 25 wins in a row to finish the season, tied for the eighth-longest win streak in school history. He was a perfect 8-0 during the postseason. In the NCAA Championships, he took out Augustana's undefeated Adarios Jones, seeded second at the tournament, in sudden-victory, 9-7, to win Lycoming's 10th national title.

Lynd picked up the award for the first time after posting a 12-4 record with 10 falls in his time as a backup to national champion Garrett Wesneski. The business administration major posted a 54-36 mark with 35 pins in his career.

Miccio earned the award for the first time, as the sociology major joined his cousin, Brandon Conrad, in the club, as Conrad earned the award three times from 2016-18. Miccio finished 13-7 as a senior, splitting time between 184 and 197 pounds. After dropping to 184, Miccio placed fifth at the NCAA Southeast Regional.

Corl earns the award for the first time after turning in a solid junior season in which he 26-4 with two pins and nine technical falls while splitting time between 149 and 157 pounds. He won the NCAA Southeast Regional at 157 to qualify for the NCAA Championships for the second straight year, finishing 2-2 at the event before bowing out in the round of 12. In three seasons with the Warriors, the business administration major has posted a 72-18 record with 12 pins and 23 technical falls, the second-most in program history.

A NCAA qualifier, Swartwood notched a 21-9 record at 165 pounds to earn Academic All-MAC honors for the first time. He finished with eight falls and two technical falls and took third at the NCAA Southeast Regional to earn his first trip to the NCAA Championships. The business major compiled eight straight wins from Nov. 17-Jan. 11 and finished the season with 73-27 career record with 26 pins and nine technical falls, which is eighth in program history.

The MAC Champion in the 200-yard backstroke, Jordan capped his career by becoming the sixth Warrior to win a MAC Championship in multiple events. He swam a school-record 1:52.44 to become the program's first two-event MAC champion since 2000 and also set the school record in the 100-yard backstroke prelims with a swim of 50.95. He placed second in the finals with a time of 51.05, earning Second Team All-MAC honors and also placed fifth in the 50-yard freestyle (21.69). A history and political science major, Jordan was honored for the first time in his career.

In women's basketball, Kline was the lone player in the MAC Commonwealth in the top 10 in the league in points (14.5, fifth), rebounds (9.0, fifth) and assists (2.5, 10th). Her 102 free throws were third in school history, 243 rebounds sixth and 391 points are 12th. She also added 11 double-doubles, the third-most in program history and four 20-point efforts. The accounting major also earned D3hoops.com Team of the Week honors and MAC Commonwealth Player of the Week honors twice each.