Warriors hold on against Panthers for 20-7 win 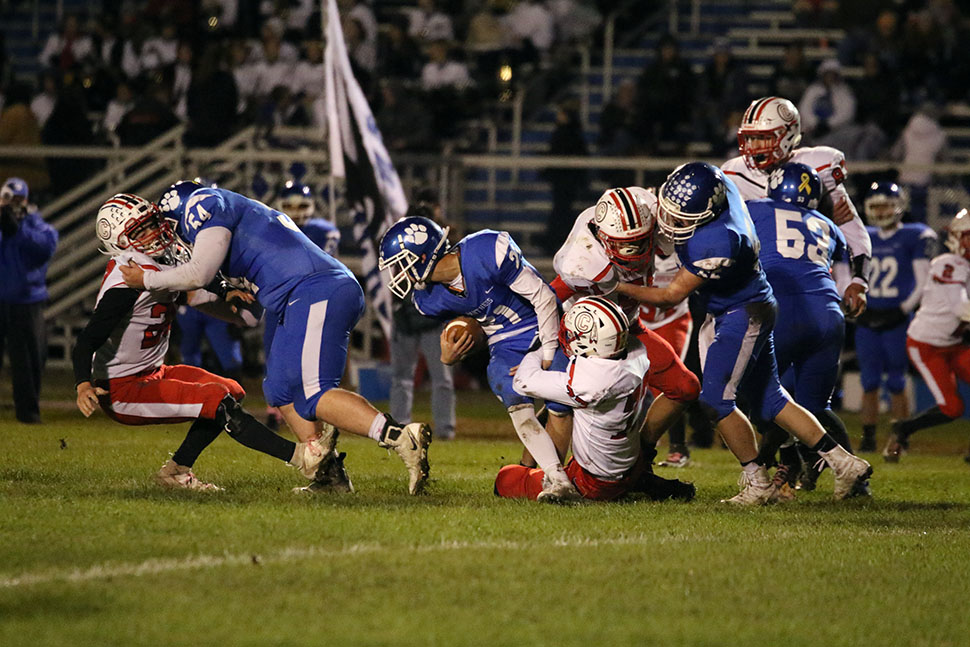 In a game full of turnovers, the Canton Warriors held on to beat North Penn-Mansfield 20-7 at Island Park on Friday, October 18.

North Penn forced Canton into making 4 turnovers on the night, but was only able to produce 7 points late in the game as they lost their second straight game.

After a scoreless first quarter the Warriors lit up the scoreboard early in the second quarter. With 10:36 left QB Uriah Bailie rolled out to find Cameron Bellows left uncovered in the right corner of the end zone for the score. Ben Knapp converted the extra point to put Canton up 7-0.

Canton held their touchdown advantage through halftime but the Panthers threatened early. Right as the second half started Colton Litzelman and Koleton Roupp moved the Panthers into Canton territory, then hit a well-timed screen to Bryan Bogaczyk that setup the Panthers up at the 2-yard line. North Penn tried three times to run the ball in, and were stopped all three times. Canton then made a goal line stand to keep the Panthers out of the end zone.

Once again the Warriors struck after a scoreless quarter. As the fourth quarter started Canton mounted a drive into Panther territory that culminated with Bailie running a 4-yard draw to put Canton up 14-0 with 10:50 to play.

On their ensuing drive North Penn-Mansfield was able to generate offense. Litzelman and Roupp connected in the flat over by the Canton sideline, with Roupp working up near midfield after a shoe-string tackle. A few plays later Litzelman found a wide-open Mitchael Tice in the middle of the Canton secondary for the touchdown. Kevin Alexander’s kick split the uprights, bringing the Panthers within a score, 14-7, with 9:21 left to play.

Canton later put one last score on the board. With 2:08 left to play Bailie caught a block near the Warrior sideline and was off to the races from 67 yards away. North Penn blocked Knapp’s kick with Canton leading, 20-7.

North Penn put together a late charge but was unable to score as time ran out.

The Warriors return home to face their rival Troy in the old shoe game.

The loss drops the Panthers to 4-5 (3-3 NTL Large School Division), while the Warriors improve to 8-1. Next week North Penn-Mansfield hosts rival Wellsboro with the coveted Morton F. Jones Trophy on the line.