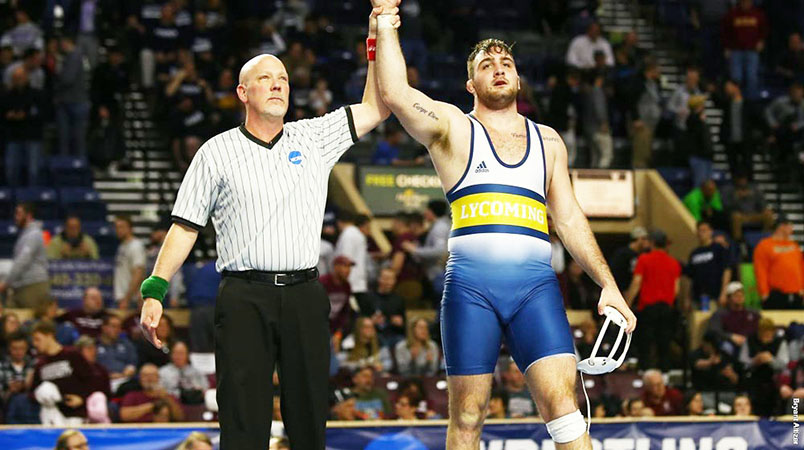 Born during the Whitehill Duals while his father, Lyle, wrestled his senior year at Lycoming College in 1996, senior Garrett Wesneski (Canton, Pa./Canton Area) always seemed fated to wrestle at the school, even after spending three years at the University of Maryland before deciding to finish his career at Lycoming under the guidance of his dad's former coach, Roger Crebs, in the summer of 2017.

What may have not been fated was what happened on Saturday night, March 9, when Wesneski, seeded fifth in his field at 285 pounds, drove in on a single and completed the move to upset undefeated No. 2 seed Adarios Jones (26-1) of Augustana in the 2019 NCAA Division III Championship final, 9-7, in sudden victory.

With the score tied at 7 in sudden victory, Wesneski was the first to take a solid shot, driving in on a single and plowing through to get the takedown before leaping to his feet and greeting Crebs, who has now coached five national champions.

"I don't have many words," Wesneski said before proving that statement wrong. "It was a wild match. He was really strong. He scored off a few, what I would call dumb mistakes. I gave up too many cheap points. But I've put in so much time. It's been a long road with a lot of adversity. When it got to sudden victory, I said to myself 'I am not tired, I am going to go, go, go.' I went to my best move, the move that I finish all the time in the wrestling room at practice every day and I finished it easy. The rest, I just blacked out. It hasn't really sunk in yet."

Wesneski finishes his senior year with a 28-1 record and his two-year career at Lycoming with a 66-5 overall record, his .930 winning percentage the best in program history. Along with Saturday night's national championship, Wesneski was also a two-time Southeast Region champion and the 2018 Southeast Region Most Outstanding wrestler.

"It's been awesome," Wesneski said. "Coach Crebs gives me a hard time for going to Maryland, but that led me here, getting hurt and not seeing a chance to make it there. Crebs believes in me and he is happy to have me in home. He made me put in extra work all year because he believes in me. I gave my dad a huge hug after and that is something that I will remember the rest of my life. All my friends at Lycoming, all the support from my hometown this weekend has been great. I think I am the first college All-American from Canton and to be a national champion to boot – I can't put it into words."

Wesneski is Lycoming's first national champion since Matt Miller won the national title at 197 pounds in 2008 and the 10th in program history. He is also the 40th in the Middle Atlantic Conference's history.

"It's been a great trip, a great way to end his career," Crebs said. "He thought he was down one at end of period, but to go into sudden victory and get that shot was great. It has been an emotional rollercoaster – we thought he was going to go to Lycoming five years ago and he went to Maryland. He didn't experience the success he wanted and he came back home. Last year, he won some matches, but not quite in condition to make it through to where he is now."

Wesneski's title helped the Warriors finish the tournament in 13th place with 23.5 points, the team's fourth top 25 finish in the last five years and the team's 14th top-25 finish in the 26-year tenure of head coach Crebs. After finishing second to Messiah at the NCAA Southeast Regional, the Warriors outpaced the rest of the region at the NCAA Championships, with Ferrum finishing 27th with 14.5 points, while the next closest finisher from the Middle Atlantic Conference was Wilkes in 43rd with 2.0 points.

Jones earned the first takedown just 20 seconds into the first period, but Wesneski quickly escaped, then bulldozed through to take a 3-2 lead. He also earned a penalty point when Jones grabbed at the edge of the mat to get an out of bounds call. Jones escaped to make it 4-3 by the end of the period.

"We felt really good with the pace of the match, the hand fighting," Crebs said. "We just kept yelling from the corner to change levels and push pace. The last shot, he created the angle by his movement, cut across and he was able to finish it."

With a first-period takedown and some solid heavy hands to ward off his opponent, Wesneski posted a 4-3 decision over Wartburg's Bowen Wileman (25-10) in semifinals on Saturday afternoon.

Wesneski warded off a deep single leg shot from Wileman in the first period, forcing a stalemate before he countered with his own single, spinning it into a takedown to take a 2-0 lead. A second period escape expanded the lead to 3-0.

Wileman got a takedown with 47 seconds left and immediately cut Wesneski to make it 4-2. He got in on another single late in the period, but Wesneski used heavy hands to ward off the attack as the period expired, despite a second stalling call.

On Friday, Wesneski pinned RIT's Connor Calkins in the quarterfinals to become Lycoming's 67th All-American. He made quick work of Calkins, notching a takedown within 30 seconds of the start of the match, earning two near-fall points soon after before working for a turn that led to a pin with two seconds remaining in the period.

He opened the tournament on Friday afternoon with a dominating 10-0 major decision over Jesse Webb of Castleton.

Wesneski is Lycoming's ninth heavyweight All-American and the first since Tommy Snyder, now a Pennsylvania State Trooper, earned a fifth-place finish in 2006.

Both juniors 157-pounder Trevor Corl (Howard, Pa./Bellefonte Area) and Travis Ogden (Clearfield, Pa./Clearfield Area) reached the All-American round (round of 12) before they dropped out of the tournament Friday night. Junior 165-pounder Hadyn Swartwood (Jersey Shore, Pa./Jersey Shore Area) (21-9) fell out of the bracket Friday afternoon.

Lycoming finished 14-4 in dual meets under Crebs, who reached 400 career dual meet wins against King's on Dec. 17. The team also finished tied for second at the NCAA Southeast Regional, the team's best finish since the NCAA moved to the format in 2013, qualifying four wrestlers for the NCAA Championships for the first time since 2001.