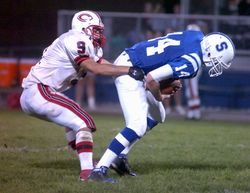 In the second quarter, Justin Brown caught a screen pass, ran toward his team's sideline, flattened one South Williamsport defender and dragged another out of bounds, gripping to the shoulders of his muddy Canton jersey.

So when he caught another dump-off early in the fourth quarter, quarterback Reese Holmes expected more of the same.

"Usually he goes for contact," said Holmes, who instead watched as Brown raced 56 yards for a back-breaking touchdown in Canton's 35-15 victory at South Friday. "And I was waiting for him to run into somebody. But then he cut it up the field. I was happy. You throw a five yard pass and it goes 55 yards down the field. No problem with that."

Brown's touchdown stretched the lead to 28-9 with 9:30 to play, the second of three scores in a late explosion that stretched what had been a difficult contest into a comfortable win.

After a South fumble, Holmes added his third touchdown toss, throwing a 21 yard lob to Bill Sourbeer for the receiver's second score, making it 35-9 with 8:03 left. This after Tyrell Wheeler ran for 147 yards and two touchdowns - including an 86 yard dash on Canton's first play from scrimmage - and before Wheeler dumped a water cooler on his coaches to celebrate a title-clinching win.

"It's amazing," said the senior, whose team clinched the NTL small-school title with the victory, remained undefeated at 7-0, and likely moved within a win of qualifying for the District 4 Class A playoffs. "We got co-champs two years ago. We lost it last year by a game. You dream of it and then you get it."

It could've been so different for South (1-6), which looked well capable of an upset for at least three quarters.

Ryan Bastian threw for 147 yards and two touchdowns, including one on a gorgeous throw into the hands of Jake Wein, who caught it in stride on the left sideline and raced 52 yards for a score that tied it at 7-all late in the first quarter.

Holmes and Sourbeer connected for their first score in the second quarter, but South's defense kept the Warriors out of the end zone again before halftime, halting Wheeler a couple yards short of the goal-line in the last play of a failed two-minute drill.

Then Brandon Gantz burst around the end to sack Holmes in the end zone, making it 13-9 in the third quarter. But after a three-and-out on their next drive, Wheeler returned a punt 51 yards, and bulldozed 19 yards down the left sideline for his second touchdown with 4:03 left in the third.

A turnover on downs and a fumble ended South's next two possessions, and by the time they got a third, it was out of reach.

"Canton makes the plays they have to make to make them 7-0," Pearson said. "And that's why they're a good team. But it was a game where you could feel ebbs and flows in the tempo. But it still felt like there were times when there were opportunities."