Fight to the finish. 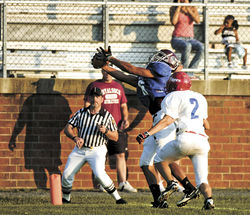 The District 4 All-Star Game is an exhibition, but do not try telling that to the North and South all-stars competing in the annual event.

Watching the South's Kevin Daugherty make a crushing block to spring Austin Carpenter for a first quarter first down run or the North's Jason Cristini rip off a big a 38 yard fourth quarter punt return, it became obvious that everyone involved Friday at South Williamsport's Rodney K. Morgans Stadium was enjoying his last moment in the scholastic sun.

Ultimately, the South offensive line took control and the South rallied for a 24-14 win. The South won for the second time in three years as four area players, Daugherty and Kyle Patts from Hughesville, Warrior Run's Josh Foresman and Lewisburg's Andrew Wagner, all made an impact.

"This game is high intensity. These guys come out here and everyone wants to play good football," said Daugherty, who will play at Lycoming next fall while rooming with Wagner. "It's a great way to go out. You get one last hurrah to finish out your high school career, one last game under the Friday night lights."

Foresman created a memorable moment under the lights when he made a huge play late in the game that helped seal the win. Cristini's punt return gave the North possession at the South 17-yard line with 2:23 remaining. On a third-and-two, quarterback Reese Holmes threw into the middle of the end zone, but Foresman leaped up and broke up the potential touchdown.

One play later, Andrew Yacina stopped Chance Wright for one yard and victory was all but complete as the South ran out the clock after overcoming a 14-10 halftime deficit.

"I kind of dropped back and saw the play develop and was fortunate to be able to tip the ball and it was a pretty cool way to end it," Foresman said. "It was a real thrill winning and coming back to do so. The offense got working well and defensively we did our thing in the second half."

South's defense dominated the second half, allowing just 73 yards, 60 of which came on a Chance Wright fourth quarter run. Matt Miller and Teighler Doak intercepted passes and the South took the lead for good when Sam Springer, the Offensive MVP, scored from three yards out after the game's MVP Steve Roth (12 carries, 98 yards) set it up with a game-changing 62 yard run.

Following Doak's interception, the South opened a 10-point lead when it went 43 yards on eight plays. A pass interference penalty in the end zone gave the South a first down at the 12 and Roth broke loose from there, making it a two-possession game with his 12 yard touchdown run.

"Nobody was down (at halftime). We were all ready to go," said Daugherty, who helped Hughesville go 8-3 last fall. "We talked about what we needed to do and we knew what we needed to do. We've been in this position before, everyone on this all-star team. We broke it down and came out and did what we had to do in the second half."

A trio of area athletes helped put the South in comeback mode at halftime. Williamsport quarterback Mike Person sparked a 14-point second quarter flurry, completing 5 of 7 passes for 63 yards. Person completed three straight passes on his first series and led scoring drives on both of his series.

Person's best pass put the North on the board for the first time. The Allegheny-bound quarterback lofted a perfect fade down the right sideline to Loyalsock's Robbie Wright who made a nice over the shoulder catch to highlight his three catch, 52 yard, four tackle performance.

"We did that fade to the back of the end zone big this year at Williamsport and Robbie really beat his man," Person said. "That was a nice play by him."

Person completed his first four passes and his 27 yard throw to Wright ignited a seven play, 55 yard scoring drive. Person sucked in the defense on the final play, faking a run before optioning to North Penn's Mark Fidler who made a good 17 yard touchdown run down the right sideline. Fidler outran several defenders and dove inside the right pylon, putting the North ahead for the first time, 14-10.

"We made one big play and then it just kept going and I had good rhythm and we got some good drives going and everyone started playing well," Person said. "I didn't think I was going to get picked when I read in the paper about the District 4 All-Star team and I got a call from North coach (Mike) Pearson saying I was on the team. I was real excited about it and it was fun."

Person was one of three Millionaires who played good games. Sha'had Harris was the North's MVP, making five tackles, and lineman Keith McCabe was a vital part of the two scoring drives.