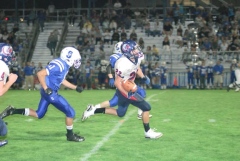 The Sayre Redskins used a big third quarter, and a huge day by Joe Yanuzzi, to roll to a 34-7 victory over South Williamsport on Friday night.

Sayre evened their record on the year at 2-2 as they scored 21 points in the third quarter Friday.

Sayre got on the board at 8:23 of the second quarter as Yanuzzi ran in from two yards out for the score. Taylor Skerpon hit the extra point and it was 7-0 Sayre.

South Williamsport cut the deficit to 14-7 as Colt Young scored on a four yard run and Justin Knee hit the extra point with 6:30 left in the third quarter.

Yanuzzi answered right back with a 78 yard kick return for a touchdown and Skerpon hit the extra point to make it 21-7 with 6:16 left in the third.

Sayre extended the lead to 28-7 with 2:22 left in the third as Jesse Dagutis broke free for a 56 yard touchdown run and Skerpon hit the extra point.

Yanuzzi capped the scoring with 7:37 left in the game as he scored on a 39 yard run. The extra point failed and the game ended 34-7.

Yanuzzi gained 134 yards on 16 carries and Dom Villanti had 59 yards on 12 carries, while Dagutis gained 61 yards on just two carries and Bradley Felt had 35 yards on four carries.

Villanti completed three passes for 52 yards with Dagutis grabbing one catch for 22 yards, Michael Bostwick getting a catch for 23 yards and Alex Lyons catching one ball for eight yards.

Bostwick and Skerpon each had interceptions in the game.