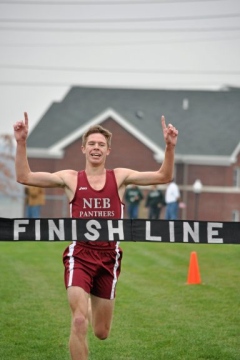 BLOOMSBURG - Coming into the Class A boys' District IV cross-country race Northeast Bradford was seen as the favorite.

And on Thursday they showed why.

The Panthers had four runners in the top 10, including the top two spots, en route to district title.

"It's pretty exciting," Northeast coach Mike Murphy said. "That's three of the last four and we're really excited to go to states and hopefully take care of business there just like we did today."

Northeast finished with 32 points with Canton (71) and Wellsboro (82) the next two closest competitors.

Panther Curt Jewett defended his title from last year, winning the race in 15:41 with teammate Sam Williams right behind in 15:49.

"It feels pretty good," Jewett said about the repeat. "I went out with a winning attitude: I could do this."

The senior jumped out early and set the pace.

"I wanted to set the tone and establish where I need to be," Jewett explained. "Where everybody else will fall in line and I was pretty surprised a lot of kids stayed with me through the mile. I went out in a blazing mile to try and set the pace and they stayed up real well."

"We took it out fast and I no idea we were going to go that fast," Williams added. "I went through in 4:43 and he had a gap on me. I was just alright, were going for a good time them."

Jewett enjoyed being able to go 1-2 with his teammate.

"It feels amazing," Jewett remarked. "We did it back to back now, hopefully we can do this at states."

Williams was pleased with his performance.

"It was very happy," he explained. "We ran really, really good times. I'm very happy with how we ran today. Curt had the gator out there pushing him and I was just going after Curt. Great crowd, lots of people, it was fun."

Their coach thought that it may be a close finish.

"Sam was closing there in the second mile," Murphy explained. "I thought it was going to be a bit of a shoulder to shoulder battle but Curt found some extra magic in that last mile and distanced himself Sam. Curt's been on fire and now's the time to be hot."

"I think we had a good day today," Murphy said. "I think four of the five boys ran their better races and that's good. Brandon and Levi, they've been working well together. I saw them talking to each other, trying to get each other to go with them. It's certainly more than just a two man show, you can't win a state title like that. And I think right now the team might be getting overlooked a little bit. Hopefully that won't be the case."

Jewett was pleased to see his teammates run well.

"I know what they can do now," he said. "Every once and a while somebody has an off race, anything can happen but I hope they can have strong races like they did today. They did amazing, everybody did amazing."

After the two Panthers at the top the individual state qualifiers began streaming in. Things were a little more competitive this year as the new classification would only take five runners from District IV.

"It feels awesome," Jackson said about qualifying for states. "I'm so glad I finally qualified because the pressure is off."

The senior state medalist was looking to build some space between him and the pack behind him.

"I wanted to create a gap between me and the guy behind me so I could have a cushion the rest of the time," Jackson explained. "With just five spots it was very competitive. Even if they did catch up I could out sprint them."

Jackson sat in third most of the race but was passed late by Molino coming into the home stretch.

"I knew he had a 20-30 meter lead on me," Jackson said about the finish. "I heard the crowd cheering so I wanted to get a good sprint, try to get him at the end. He held me off."

"It felt real good," Mullen said. "I knew it was going to be tough competition. I went out to get top five, I toughened it out and go it."

The senior Griffin became the first boy's runner from Sullivan to qualify for states all four years.

"It feels good," Mullen said but gave some credit to his. "I put in a lot of hard work but along with all my teammates through the years helped push me and good coaches."

Mullen knew that staying near the front was key.

"I just wanted to stay up there," he said. "I didn't want to get back from the top pack there. It's hard to make up ground on good runners."

With two state medals Mullen will be eyeing his third at states.

"I definitely want to medal again," he said. "Meet up with some of the guys from the district and run the race with them. I know we have a lot of guys who can medal, just see what happens at the end."

Canton's Emmett Watson (16:39) took sixth overall. It was a bitter sweet moment for the senior, though.

"It feels good but I really wanted to go as a team again," he said. "It's just not going to be same down there without my teammates running with me. But still it's a good feeling."

Watson initially wanted to stay with Jackson but that changed quickly.

"He kind of got a little further ahead and Kelby Mullen came up next to me," Watson explained. "I picked him. I knew we raced each other well at Bloomsburg, he would push me along and he did that."

Watson joins his brother Garth as an individual qualifier for states.

"It's good," Watson said. "I try not to compare him to myself too much because he did win districts three times, I just finished sixth. There's not much of a comparison but it's both kind of cool that we achieved the same goals."

The senior sat back at the start of the race.

"I wanted to start out kind of slower and make my way to the front," Hill explained.

"I knew that states was right in front of him and I knew I had to get there," he said. "I know I had it and I was so happy."

Hill had been getting better the past few weeks in preparation for a big day at districts.

"I knew it would be close," he said. "There was a bunch of people that had a chance to do it and I'm just glad that I made it."

Hill and Jackson are especially happy to be experiencing this together.

"It's great to go with a teammate," Hill remarked.

Wyalusing's Zamien Benditt-Parkes (17:09) was 10th overall and the first person out while Steely (17:12) ran most of the race near the top five but faded to 11th.

In the team standings after the top three Sullivan County (97) was fourth, Wyalusing (102) took fifth, Southern Columbia (112) was sixth and Bloomsburg (191) came in seventh.

The smaller field was noticeable to the runners.

"It was the strangest thing," Williams explained. "You take a step from the line and you're like 'where's everybody else.' Then you realize there's only 70 kids and its possible seven of them are going to take home state medals."

It made it difficult for some runners.

"It's a lot harder because normally you would have maybe five or six people all around the whole time just kind of cruising," Watson explained. "But when it spread out it was just kind of like two or three of us together."

Looking ahead to the state meet at Hershey a week from Saturday Murphy expects his top two finishers to be in the mix.

"Next week it should be a race between five or six guys," the veteran coach remarked. "And we've got two dogs in that fight so hopefully we can get one of them up there."

Team wise, the Panthers will be in the mix for the title as well.

"It's just so great to have a team of guys that you run with the whole summer and fall," Williams added. "You just know they worked so hard and they've earned it. Were just very proud of them."

Jewett is excited about his and Williams' potential.

"Hopefully we can get top three finishes at states," he remarked.