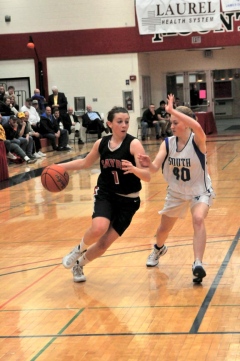 With the win South Williamsport advances to the PIAA playoffs, while the season comes to an end for the Redskins.

The game looked to be close after the first quarter with both teams scoring 10. It still looked like a close one going into the half with South Williamsport putting up another 12 points but Sayre only netting seven to bring the half score to 22-17. The game started to get away from the Redskins during the third quarter with Sayre only hitting eight points but the Mounties hitting 21 points. South Williamsport tacked on another 16 in the fourth while Sayre only hit five points.

Tierney Pfirman led the game with 24 points and eight rebounds. She scored 12 points from the floor and another 12 from her 13 attempts at the free throw line. Pfirman also tied for first in assists with three and steals with three. She also led the game with two blocks.

Jamie Steer finished second on the team, third overall, with 11 points and six rebounds. She also had two steals and two assists. Steer had the games only other block.

Sayre's Mollie Robinson led with 13 points and Adrienne Malorzo had six boards to lead her team.

Elyse Skerpon had eight points for Sayre and Kelly Villanti had four, while Kelsey Young finished with three points in the game and Malorzo had two points.

Sayre lost the battle of turnovers with 28 while South Williamsport only gave up the ball 16 times.