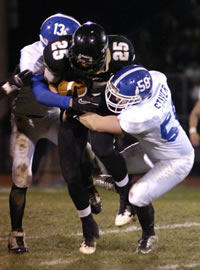 FRANKLIN TWP. - They huddled together one final time, their blue helmets raised high in the air, with the nicks and mud on the white numbers still visible some 30 minutes after their season ended.

South Williamsport's one final cheer for the 2012 season was loud and it was emphatic as it resonated through Southern Columbia's Tiger Stadium. There wasn't a hint of disappointment in the voices of the South Williamsport players.

Just minutes following the Mounties' 47-12 loss to Southern Columbia on Friday night in the District 4 Class A championship game, there was perspective in the eyes and the words of the players and coaches who stood huddled with friends and family near midfield. There was disappointment the Mounties hadn't punctuated their remarkable renaissance with a district championship, but those same people who were disappointed were also proud at what was accomplished this season in South Williamsport.

The Mounties won their first playoff game in 15 years a week ago. They had just their second winning season this century. And the pride of a program which was twice in the state final in the 1990s was restored.

"It was nice playing for a championship and being a runner-up is a great feeling," South Williamsport head coach Chris Eiswerth said. "We had two losses this year and both were to Southern, who is possibly one of the two best teams in the state. I think the kids knew what they were up against, but I still think they really wanted to win and they thought they could compete."

South Williamsport carried the momentum it gained in a beatdown of Bloomsburg a week ago into the first quarter last night. Despite punting on the game's opening possession, they established an ability to run the football with both Brandon Stonge and Dominick Bragalone. And after a big defensive stop, Bragalone gave the Mounties the lead with a brilliant 43-yard touchdown jaunt on a toss sweep play.

South Williamsport had runs of 9, 43 and 17 yards on its first three possessions, but didn't pick up another run like that until the fourth quarter when Southern Columbia's starters had been removed from the game.

"It was crazy. It was amazing," Bragalone said of his touchdown run. "I saw Stonge kicking the kid out and I saw another one coming, so I went around Stonge's block. The receiver had a great block and I cut it up and scored."

"Anytime you can score and score early against a team like that, it's a good feeling," Eiswerth said. "The kids were excited. I wish it would have carried through the whole game."

But after a deadlocked 6-6 first quarter, South Williamsport went two quarters without gaining a first down. The Southern Columbia defense made better recognition of South's running plays to the perimeter while still bottling up Stonge - who set the school's single-season rushing record last night - up the middle. Stonge had just 37 rushing yards against the Tigers' first-team defense before a couple big runs late let him finish with 69 yards and a touchdown.

The defensive adjustment led to Southern winning its fifth consecutive District 4 Class A title, and its 21st in the last 22 years. The Tigers face District 2 champion Dunmore on Friday, likely at Valley View High School.

"I think it was just a matter of our players responding to the running game," Southern Columbia head coach Jim Roth said. "After the first couple series - and they had some success early - it seemed like our kids just got a feel for what they were doing and responding to it."

Southern held South Williamsport to just 88 yards of offense in the first half, and take away Bragalone's touchdown run and the Mounties gained just 1.6 yards per play in the first half. The Southern defense was so suffocating it basically played the second quarter on just one half of the field.

Southern scored in three plays to start the second quarter thanks to the first of Adam Feudale's two touchdown runs. Quarterback Taylor Young threw a 51-yard touchdown pass to Matt Lupold before later running for a 2-yard touchdown of his own. Feudale scored his second touchdown with 1 minute, 55 seconds left in the first half to give Southern a 35-6 lead.

Southern's average scoring drive in the second quarter was 3.8 plays and 47.6 yards.

"It's tough enough to stop them when they have a long field, let alone a short field," Eiswerth said.

"As you get deep into these playoffs and you play better teams, that's another phase of the game that becomes important," said Roth, whose Tigers are ranked second in the state in Class A. "That's huge to capitalize on that."

Eiswerth stood around midfield last night after the game sharing hugs with parents and players, posing for pictures, and accepting thank you after thank you from the team that helped make South Williamsport relevant again in District 4 and there was never a hint of disappointment on his face carrying around the leftover silver medals that didn't have a neck to be draped on. How could their be disappointment in a team which won 10 games?

"They've brought a sense of pride back to South Williamsport," Eiswerth said. "They'll have that for the rest of their lives."