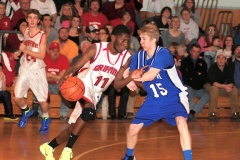 LAPORTE - The Griffins came into this game knowing that they had to put forth more effort than the last time they met South Williamsport.

"We talked a lot about before the game when we went to their place they were the more aggressive, more physical team," Sullivan County coach Glenn Vaughan remarked. "They out hustled us there."

It was different this time.

The Griffins jumped out to a 16-8 first quarter lead, then held South to five points in the second quarter to extend the lead to double digits. They held the Mountaineers to 18 second half points to secure the win.

"We had to make sure we had more heart," added Vaughan. "I'm really proud of our kids coming out. It seemed like we got the loose balls tonight, we got the rebounds tonight and we answered their runs."

Galeton led 34-29 at the half but a 22-9 third quarter Wyalusing run gave them a 51-43 lead going into the fourth quarter. The Rams then held on from there.

The Knights held CV to three second quarter points, then out scored them 24-12 in the third quarter en route to an NTL cross-over boys' basketball win Saturday.

CV led 17-11 after one but the Knights took a 22-20 halftime lead. In the third they outscored the Indians by 12 to secure the win.