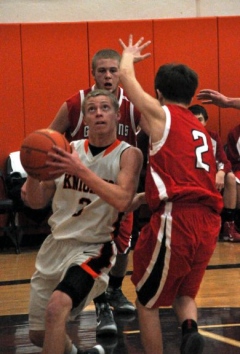 TOWANDA - The Griffins put the clamps on Towanda in their 43-30 opening round boy's basketball win Friday during the Williams Auto Group tournament.

The Black Knights led 13-12 after the first quarter but only scored 17 points the rest of the game.

Noah Huff led the Knights with 15 points while Dave Rodenhizer added 11. Dylan Bates and Joel Miller had two points each to round out the Towanda scorers.

Towanda won the JV game 37-29 behind 15 points from Tristan James. Sean Flannery had 17 for the Griffins.

The Griffins will face Mansfield in the championship game today while Towanda takes on Wyalusing. The action begins at 6 p.m.

TOWANDA - The Tigers held on to advance to the Williams Auto Group championshp game Friday.

Mansfield got 17 points from Taylor Hillson, 10 of which came in the second quarter, in the victory.

The Tigers led 12-11 after the opening quarter then opened that lead to 26-19 at the half. Wyalusing hung tough, though, staying in striking distance as they were down 39-31 going into the fourth quarter.

Despite eight points in the final quarter by Wyalusing's Cody Pickett Mansfield would hold on for the win.

Pickett had 21 to lead all scorers while Jeremy Allyn added 10 for the Rams. Matt Woodruff scored four while Terron Millard, Shane Salsman and Dustin Shaw had two points a piece to round out the Wyalusing score.

Mansfield will face Sullivan County in the title game today while Wyalusing takes on Towanda in the consolation, which tips at 6 p.m.

The Green Hornets pulled away in the fourth quarter to advance to the championship game Friday.

Wellsboro stayed one step ahead of the Indians most of the night, taking a 47-42 lead into the fourth quarter. That's when the Hornets pulled away, out scoring the Indians 20-12 in the period to secure the win.

Joey Doganiero led the way for Wellsboro, scoring 19 points while Jordan Jackson wasn't far behind with 17 points. Dylan Prough was also in double figures with 13 points.

Wellsboro will play South Williamsport in the title game at 7:30 p.m. today.

The Mountaineers pulled away for an opening round tournament win past the Warriors Friday.

South jumped out early, taking a 15-9 lead after the first quarter. They added to that lead by halftime 33-22.

Canton rallied in the third, cutting the deficit to 47-39 but South held on in the fourth, scoring 28 points in the final period to pick up the win.

Eddie Larcom led Canton with 14 points while Emmett Watson chipped in with 13. Jessie Lattimer netted 11 while Tim Bassett had eight.

Also for the Warriors, Wes Moore scored five while Chris Thoren and Mason Moore had three points each.

Canton will play Muncy in the consolation game today at 6 p.m.

The Rams led 20-12 after one quarter and 42-32 entering the fourth, before holding on for the victory.

Mackenzie Martin led the Rams with 19 points and Kasey DeVoir had 11 in the game.

Ally DeVoir had nine points and Savannah Schools had four points and Paighton Martin and Arielle Kneller had three each.

The Indians got 16 points from Grace Earle as they rallied from a 14-12 halftime, outscoring Northern Potter 11-4 in the third quarter on their way to the win.

A huge second quarter lifted CV into the final of their tournament.

The Indians outscored Northern Potter 18-90 in the second quarter on their way to the victory.

Brandon Whitesell had 18 points and Bryant Painter had 10 points.

Joshua Nudd had seven points and Tyler Melko and Dakota Corwin had six each for CV. Luke Plummer finished with two points in the game.

Northern Potter was led by Dylan Wolaski with 11 points.

Butckail got 18 from Chuck Probst and Spencer Howard had 17 for Oswayo Valley.

The Tigers got 18 points from Molly Wood and 12 from Ali Hillson in the victory.

Jackie Hillson had three for Mansfield and Erin Dempsey and Maggie Farrer had two each in the game.

Troy got 10 points from Brooke Mattocks and eight from Vanessa Benson.

Faith Ceely had seven points and Kelsey Bristol had five for Troy, while Taylor Johnston finished with two points.

Mattocks had two steals and nine boards and Benson had five boards, while Ceely had three steals and four rebounds.

Troy plays North Penn in the consolation game at 6:30 p.m. today, while Mansfield takes on Galeton in the final at eight.

Galeton got 13 points from Latascia Shadle and 11 from Andi Leach in the victory on Friday.

April Howell had six points, McKayla Cochran finished with four points and Mataya McPherson had three in the game.

North Penn got 10 from Whitney Holdren and Kaitlyn Garverick finished with eight points.

The Warriors got 22 points from Kim Daugherty, who had eight in the first quarter and 10 in the third quarter in the victory.

Lori Horton had 12 points and Cheyenne Jones finished with eight points in the game.

Jenna Hugic had four points for Williamson and Jamie Cook had three points, while McKenna Greenwalt, Caitlin Chaffee and Hanna Fitzmartin had two points each.

Liberty got 15 from Kelsey Harer and Chelsea Repard had 12 in the game.

The Green Hornets rallied from a big deficit but ended up coming up short in girl's basketball action Friday.

The Hornets tied it up after the third quarter at 30-all but it was the Spartans out scoring Wellsboro 10-8 in the final quarter for the win.

Mackenzie Marple led Wellsboro with 18 points while freshman Jada Jackson added seven. Kim Acorn and Sarah Ingerick had four points a piece, Kiana Acorn and Jordan Butters had two points each and Hannah Zuchowski rounded out the scoring with one point.

The Hornets play in the consolation game today at 6:00 p.m.