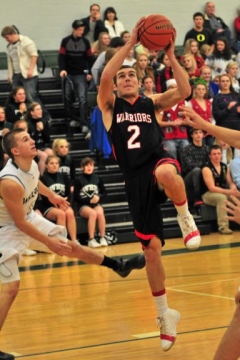 The Towanda Black Knights trailed by eight with two and a half minutes left in regulation on Wednesday night, before a rally helped them defeat Montrose 63-56 in double overtime.

Noah Huff had 23 points in the game and David Rodnehizer had 22 for the Black Knights, and they were at their best in the fourth.

Huff had three threes in the quarter and the two combined for 17 points in the fourth quarter as the Black Knights rallied.

Two free throws by Huff with five seconds left had the Black Knights holding a three point lead, before Montrose tied things on a 30-foot shot at the buzzer.

In the first overtime Towanda had a shot to win it, but it didn't fall, but in the second overtime the Black Knights took control.

Joel Miller had 10 points for Towanda in the game and Garrett Mosier had four points, while Brad Sparbanie and Brandon Dinelli each had two points.

Dinelli had three rebounds and two steals and Rodnehizer had eight boards, while Mosier had seven rebounds and Miller had six boards.

Brenton Warner led Montrose with 18 and Cameron Dean had 12 in the game.

Montrose won the JV game 53-45. Tristan James led Towanda with 18 and Dylan Bates had nine, while Bailey Potter had six. Jack Fruehan and Hunter Traver had 14 each for Montrose.

Towanda hosts Nanticoke with a 1 p.m. JV start on Saturday.

WELLSBORO - The Warriors led 29-28 at the half and with neither team scoring in the first 3 1/2 minutes of the second half, they held that one-point lead into the midway point of the third.

However, a strong Wellsboro defensive effort held Canton to 20 second-half points as the Green Hornets rallied for the victory.

Dylan Prough led Wellsboro with 19 and Jordan Jackson had 17 in the game as four Wellsboro players hit for double figures.

Kieron Smethers had 11 for Wellsboro and Matt Reese had 10 points in the game, while Michael Pietropola finished with four points.

Canton was led by Eddie Larcom as he paced four Canton players in double figures with 12.

Jesse Lattimer had 11 and Emmett Watson and Tim Bassett each had 10, while Mason Mooer finished with six points.

Wellsboro is at Athens on Friday.

The Wildcats scored 48 first-half points on their way to the victory on Wednesday.

Ray McDougan, Brandon Fauver and Garrett Clark each led Athens with 17 points and Luke Wright had 12 for the Wildcats.

Jon Canfield had eight in the game for Athens and Dan Moyer and Curt Moore had four points each in the victory.

Clark had six assists and Fauver had three assists.

North Penn was led by Dan Prouty with 14 and Brad Brubaker and Cody Crum with 10 points each, while Brandon Carlson and Dayton Wood both had three points and Dylan Rudinski and Andrew Craig added two each.

Prouty had five assists for North Penn in the game.

Athens won the JV game 48-44 with Jarrett Priester scoring 14 and Tyler Forbes getting 12 for Athens.

The Warriors got 20 points from Hunter Huyett and 17 from Troy Adriance as they shut out the Panthers in the first quarter on their way to the win.

Josh Bradbury finished with five for Wellsboro and Shea Daly had two points.

Jordan Goodwin led the Panthers with 10 and Shawn Hakes had eight, while Todd Bonin finished with four points.

Caleb Gerrity had three points and Aaron Pifer had two for Northeast Bradford.

Goodwin had eight rebounds and Bonin and Gerrity each had three steals, while Bonin added five blocks and Goodwin had three blocks.

Williamson won the JV game 41-29 with Bradbury pacing the Warriors with 13 and Elijiah Arias scoring eight for the Panthers.

Williamson is at Canton on Friday and the Panthers are at CV.

Taylor Hillson scored 31 points to lead the Mansfield Tigers to a win Wednesday.

Bo Burleigh had three points for Mansfield and Chanderl Correll and Bryce Zaparzynski each had two points and Brady Andrews had one point.

Cody Pickett led the Rams with a 16-point effort while Matt Woodruff had six and Shane Salsman and Dylan Bulick each finished with five and Jeremy Allyn added four points.

Wyalusing travels to North Penn on Friday and Mansfield hosts Troy on Friday.

Mansfield won the JV game 45-39 with Ryan Campbell lead Mansfield with 11 and Woodruff leading the Rams with nine.

Nate Williams had 28 points as Sayre picked up a victory on Wednesday night.

Nick Skerpon had 10 in the game for Sayre and Walter Wampole had six points, while Marshall Higley finished with five points.

Adam Wampole had four points in the game and Jeremy Kyc and Seth Murrelle had three points each, while Nick Sweet added two points.

Walter Wampole added eight rebounds and Kyc had five boards, while Murrelle had six assists and eight steals and Higley had four assists.

Williams had three steals and Walter Wampole, Skerpon and Adam Wampole all had two steals and Higley had one blocked shot.

CV got 24 points from freshman Bryant Painter and Brandon Whitesall had 10 points in the game.

Josh Nudd had three points and Nate Bonham and Tyler Melko had two points each.

The Trojans got 23 points from Brandon Mattocks and 17 from Thomas Swain as they rallied from a 21-14 halftime deficit to get the win on Wednesday.

Evan Polly had five points and Ryan Reeves had four in the game.

Polly and Chad Cole each had nine rebounds and Mattocks had eight steals.

Jacob Spring and Cody Schmouder each led Liberty with 15 and J.J. Walker had seven, while Dalton Litzelman finished with six and Tyler Upham had two.

Troy is at Mansfield on Friday.

Galeton improved to 5-1 on the year with the victory.

Latascia Shadle led Galeton with 13 and Andi Leach had 10 in the game.

McKayla Cochran had nine for Galeton and Mataya McPherson and April Howell each finished with eight points.

Shaleigh Proctor and Talia Hatch had four points each in the victory and Ashley Cizek had two points.

Galeton won the JV game 34-16 with Cizek scoring 13. Hatch had eight and Karissa Burrous had six for Galeton.

The Griffins were within one at 7-6 after one quarter, bur a 21-point second quarter helped South pull away.

Addie Jordan led Sulllivan County with eight and McKenna Bagley had six points in the game.

Shelby Zeller had four points and Lori Schultz and Cortney Rupert had three points each, while Crystal Riebe had two points and Kelly Kramer had one point.