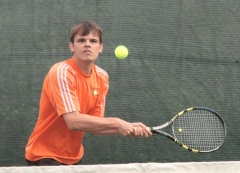 Rodenhizer won his first round match-up over Milton's Ryan Pace 6-0, 6-2, then he beat South Williamsport's Bryce Jones 6-1, 6-2 in the second round.

In third round Rodenhizer ran up against top seeded Peter Csernica of Lewisburg and fell 7-6, 6-4.

Chaffee defeated Milton's Drew Pace 7-6, 6-2 in the opening round, then lost to second seeded Maria Cioffi of South Williamsport 6-0, 6-0.

Gill beat Bloomsburg's Brandon McCaffrey 6-1, 6-0 in the opening round before losing to Loyalsock's Caleb Vuocolo 6-4, 6-3 in the second round.

Neither Liberty player was able to pick up a first round win.

Ryan Martin fell to Jones 6-1, 6-2 in the opening round while Andrew Nadas lost to Bloomsburg's Dylan Everhart 6-1, 6-0.

Wellsboro's Garrett Carr also lost in the opening round. He fell 6-1, 6-0 to Muncy's Evan Artley.

In the semi-finals Csernica will face Vuocolo while Koch will take on Cioffi Monday back at Williamsport High School.