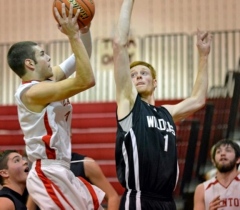 Eddie Larcom and Emmett Watson combined for 54 points as Canton handed Athens its first NTL loss of the year 67-45.

Canton jumped out to a 16-8 lead after one quarter. Athens trimmed the deficit to 28-22 at the half, but a 21-point third quarter put Canton up 16 entering the fourth.

Larcom got the Canton offense going in the first quarter with three threes and he had a game-high 29 points for the Warriors.

While Watson and Larcom have been the team's top two scorers all year, they haven't always had a huge night at the same time.

"They've had nights where they both went for 20, or both 18," Canton coach Lance Larcom said. "But, not usually in a big game, usually the times they do that we win by 20 or lose by 20. For them to do it in a game for us of this magnitude is big.

While Watson and Larcom both had a big night, they did it in different ways for the Warriors.

"Eddie shot the lights out and he had a lot of finishes at the basket and Emmett got to the foul line 13 times and hit 11 of them. We lean on them for exactly what they did," Lance Larcom said. "Eddie knocking down four threes in the first half kind of opened things up for Emmett to take (Garrett) Clark of the dribble and Wes Moore did the same thing getting to the basket."

While Watson and Larcom had big games, they had plenty of help on Wednesday.

Clark led Athens with 22 points and Luke Wright had 10. Brandon Fauver had seven points and Robert Fauver had three, while Curt Moore had two and Zane Vargason finished with one point.

For Canton the victory is a big one, not only in the league standings, but also for their confidence going forward.

"It's good to know they can play against a very good team," Lance Larcom said. "The coach in me my first initial thought after the game was I'm upset that we didn't take care of business earlier against Towanda and Sayre and then we would be in a great position right now.

"We need to use this and move forward and let the chips fall where they may in terms of the NTL race and use this as a springboard to set ourselves up for district play. We have to see what kind of seed we can earn for the district playoffs by maybe picking up three or four wins that this win might help with."

Canton hosts Wyalusing on Friday and Athens is at Cowanesque Valley.

TOWANDA - The Black Knights trailed 21-20 at the half, but they outscored the Trojans 30-16 in the second half, including 13-3 in the fourth, on their way to the victory.

With the win, along with Athens loss to Canton, lifts Towanda into a tie with Athens atop the NTL East standings with one loss each. Canton and Sayre each have two East losses.

Noah Huff led Towanda with 20 points and Joel Miller had 13 in the game.

David Rodenhizer had eight points for Towanda and Garrett Mosier had four points, while Brad Sparbanie had three and Dylan Bates had two.

Miller had six boards, two blocks, a steal and an assist and Noah Wheeler had four boards and a steal. Huff had five assists, two steals and three rebounds.

Troy got 14 points from Brandon Mattocks and eight from Evan Polly.

Chad Cole had six for Troy and Jed Wright had five, while Ryan Reeves had four.

Towanda won the JV game 61-18. Nick Innocenzo had 16 and Wheeler had 11 for Towanda, while Sean Mosher led Troy with eight.

Towanda is at Sayre and Troy hosts Northeast Bradford on Friday.

The Redskins got 29 points from Nate Williams in the victory on Wednesday.

Seth Murrelle had 10 for Sayre and Marshall Higley finished with seven in the win.

Walter Wampole and Jeremy Kyc each had six for the Redskins and Cuyler Kochin had four points, while Adam Wampole finished with one point.

Todd Bonin led Northeast Bradford with 21 and Jordan Goodwin and Shawn Hakes each had nine in the game.

Northeast Bradford is at Troy on Friday.

The Green Hornets jumped out to an early 11-0 lead only to see the Rams play virtually even the rest of the night.

Michael Pietropola had eight for the Green Hornets and Matt Reese had five, while Kieron Smethers had three.

The Green Hornets outrebounded the Rams 31-20 led by Smethers' eight boards and seven more from Jackson.

Turnovers once again plagued the Rams who gave the ball away 28 times to 15 for Wellsboro.

Shane Salsman paced the Rams' offense with 17 points followed by 15 from Cody Pickett and eight from Dylan Bulick. Also scoring for the Rams were Terron Millard with six, Jeremy Allyn with five and Matt Woodruff, Jonah Shotwell and Jordan Salsman each with two.

Allyn led the Rams with seven rebounds while Bulick pulled down six and Shane Salsman had five.

Allyn also led the team with five assists and two blocked shots while Pickett led the Rams with three steals.

Wellsboro also won the JV game 41-38 as Dawson Prough led the Green Hornets with 18 points while Kyle Tinna paced the Rams with 10 points.

The Rams, who fall to 4-10 overall on the season, will return to NTL East play on Friday when they travel to Canton.

Kelby Mullen had 20 points to lead the Griffins to the victory on Wednesday.

Sean Flannery and Bob Polcrack each had three points in the win and Adam Szlanka and Lucas Hatton chipped in with two points each.

Sullivan County won the JV game 50-43 with Flannery leading the Griffins with 18.

Sullivan County is at Muncy on Saturday.

The Indians got 15 points from Tyler Melko and Josh Nudd had 12, while Brandon Whitesell finished with 10 in the win.

Liberty was led by Cody Schmouder with 10 and Dalton Litzelman had nine, while Jacob Spring had eight.

The Warriors got 20 points from Hunter Huyett and 18 from Troy Adriance in the victory.

Kaynen Arredondo led North Penn with 13 and Dayton Wood and Cody Crum each had 11.

North Penn led the game 31-26 at the half, but Williamson outscored the Panthers 22-4 in the third to get the win.