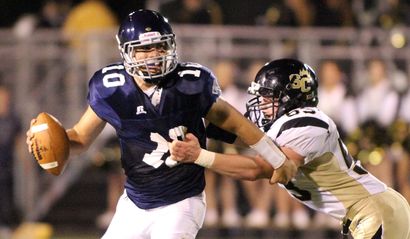 MUNCY - Following last week's win over Warrior Run, Muncy's head coach Jay Drumheller warned his team that in their next game "the big boys" would be coming to town. On Friday night the big boys arrived.

Southern Columbia made the 40-mile drive from Catawissa to Muncy for the first time since Drumheller was a freshman student there, 33 years ago, in 1980.

The Tigers made their trip worthwhile, winning in dominating fashion, as they romped Muncy 55-13.

Coming into Friday night's contest, both teams were sporting spotless 4-0 records. But after Southern trounced a good South Williamsport squad last Friday night, Muncy knew it would have its hands full trying to contain the Tigers' high-octane attack.

"As you can see, Southern is a machine, " Drumheller said. "Their overall team speed can make you look foolish. They are No. 1 in the state for a reason."

The winning formula for Southern involved great play in all facets. Making use of a powerful run game that racked up 308 yards, and a solid pass attack that added another 121 yards, Southern scored at will throughout the game's first three quarters.

Leading the way for the Tigers' brilliant run game was senior running back Adam Feudale, who accounted for 170 of his team's rushing yards and had touchdown.

The Tigers' passing game, which was epitome of consistency, was led by sophomore quarterback Nick Becker. Becker completed 7 of his 9 passes, accumulating more than 120 yards with 2 touchdowns, before being sat in the game's third quarter.

Likewise, their starting defense also had a great showing, as they proved nearly impenetrable to the Indian offense.

With five sacks, the Tigers made passing the ball a difficult task for Muncy. The pressure up front led to three interceptions for Muncy's quarterback Anthony Barberio, with two of those being snagged by Southern's Garett Sosnoski.

Despite the sacks, Drumheller felt that his offensive line played a decent game.

"Our front line protected Barberio well," he said. "Anthony got sacked a few times, but on some of those he needed to get rid of the ball. They aren't going to give you time."

Perhaps the biggest play of the game for the Tigers came at the end of Muncy's first offensive drive of the game.

With Muncy backed-up to their own 20 yard-line on fourth down, Chase Tillett shot through the Indians' punt protection and blocked a punt, which Southern recovered on the six yard-line.

"All year long he has had the pressure on," Southern's head coach Jim Roth said. "It looks like he could block almost every punt, because he's so quick."

On the next play, Blake Marks scurried for a six-yard score, knocking the wind and emotion out of the Indians early.

Roth was pleased with the way his team played as an overall unit, and feels that the Tigers are just starting to jell in all areas of the game.

"If your going to have a strong team and an outstanding season, you are going to need all those areas to contribute," Roth said. "The best part about the way things have gone for us the last couple of weeks is that it seems we are definitely playing at a higher level than we we're at the beginning of the year."