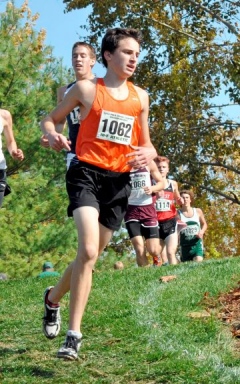 HERSHEY - For Towanda's Simon Smith there was one big goal all season long.

The District title was nice, the regular season success was special, but what Smith was hoping for was a state medal.

"It's what I have been working for," he said.

While Smith won the NTL and District 4 races, it wasn't until Saturday that he felt like he was running his best.

"At NTL and districts I didn't feel great," Smith said. "I knew I could probably still medal if I didn't feel my best, but I felt good."

What made things even more special for Smith was running with his brother Schuyler, who finished 41st in 17:31.

"It's really cool," Schuyler Smith said. "We are the first Towanda brothers who made it as individuals."

Running out in lane three near the edge the two Towanda runners knew they had to get out fast.

"You want to get out in front, you don't want to get boxed in," Schuyler Smith said. "Our starting box was close to the edge so you couldn't be lazy at all or you'd get stuck."

For Simon this medal is nice, but he is already looking forward to the future.

"I will work hard and look forward to track and next year," he said.

The junior already has a big goal in mind for next season.

"Top five," he said. "That was the optimistic goal for this year, but I'm happy with my place."

Earning a medal was made even more special when Towanda's Katelin Purdy, who like Simon had won districts, brought home a medal for the girls team.

"It wasn't my best race, but it was okay," Sweet said.

By the time the AA boys race went off the temperatures started to warm up and after a couple weeks of colder temperatures that was an adjustment.

"When it changes like that the weather can be a little bit of a factor," Sweet said.

Sweet was happy with the way the race began, but he just didn't think he finished great.

"I got off to the start I wanted, I just faded," he said.

Despite not having his best finish Sweet was happy to be back at states.

In the Class A race the Northeast Bradford Panthers were the defending state champions, but after losing two of the top runners in the state to graduation this team had a little different look.

However, the Panthers showed they were still a threat, finishing third with 117 points. Saegertown won the title with 60 points, followed by Masterman at 93.

"It's all about the coaching," Brian Horton said of the Panthers success.

"Everyone does their part and we just keep on rolling," Levi Upham added.

"I think it could have been better, but it was not bad," Devonshire said.

Freshman Garrett Smith finished 21st in 17:08 for the Panthers.

Running near Devonshire all race Smith just wanted to keep him in sight.

For the Panthers they were happy with the way the race went.

"It was pretty good," Ben Horton said. "We did good as a team, we were pleased with where everyone placed."

"It was the best race of my life," Sam Beers added.

The Panthers knew this year they would have tough competition.

"We knew coming in Saegertown and Masterman were good," Austin Senn-Bishop said. "We knew we had to run extra hard."

"It wasn't my best race," he said. "My nerves definitely were going."

Racing at states for the first time Benditt-Parkes thinks he went out fast.

"It pulls you too fast," he said of the race. "I went out too fast because of nerves. I ended up burning myself out halfway through the race."

The Wyalusing junior knows this was a tough race.

"It's a lot tougher than anything else," he said. "Everybody here is good. During NTLs you know where you stand, where you should be during the race.s But, at states it's the best of the best."

While Benditt-Parkes wanted a better finish, he was happy to get his first time at states.

"It was a nice experience," he said. "If it was easy, everybody would be doing it."

"It wasn't as good as I wanted, but I was just happy to make it here," he said.

While Gleckner made it to states as a freshman with the Canton team, he thought this was a new experience.

"I ran here in ninth grad as a team, but I forgot how much competition there was," he said. "A couple seconds here make 20 places."

Running at states without his team also was a new experience.

"It's a lot different, it's pretty lonely," he said.

From the start Gleckner was toward the middle of the pack and that is where he finished.

"If you don't get out fast you can get stuck," he said. "I started in the middle of the pack and that's about where I finished."

District 4 runner Griffin Molino of South Williamsport won the Class A race with a time of 15:54, finishing 31 seconds ahead of the runner-up.