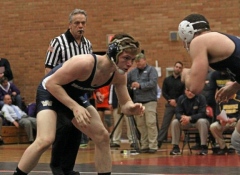 WILLIAMSPORT - For the past four years Canton's Garrett Wesneski and Connor Route have been battling each other in the mat room.

On Saturday all that work paid off.

The duo were two of the four NTL wrestlers to win Northeast Regional titles, along with Athens' Brian Courtney and Williamson's Billy Barnes.

Wesneski and Route won their titles back-to-back at 195 and 220 while Courtney took the 106 pound title and Barnes won the 145 pound title.

Nine locals total will be going down to the PIAA tournament next week.

"We came up wrestling as freshmen wrestling the same weight all the way through," explained Wesneski. "We've been partners since then, getting our butts kicked by the same kids or beating each other in practice. Now boom, boom at two weight classes, it's just awesome."

Wesneski's strong wrestling from the District IV Championships rolled over into Regionals as he won in the semi-finals by technical fall then defeated Benton's Logan Womelsdorf 4-0.

"It's an awesome feeling," Wesneski said about being the Regional champion. "I've worked hard all year and this was one of the goals on the way to my number one goal to be a state champion."

Last Saturday Wesneski wasn't pleased with his performance despite winning the title.

This time around he felt better about his win.

"He's a good wrestler," he explained. "He has real good defense but I got that one takedown in the first period and I felt comfortable after that. I did better riding him and I was more physical this week which was the game plan. Last week I was a little too nice."

Wesneski got the first period takedown to go up 2-0 then used a second period reversal to take a 4-0 lead.

"I feel like I owned that match throughout the whole six minutes," he remarked.

Route had a little bit tougher time even just getting to the finals.

After winning in overtime in the quarterfinals Friday he won 5-3 in the semi-finals to face Hughesville's Ethan Barnes, who had upset top seed Dylan Otis of Wyalusing 3-1 in overtime.

In the final the first period went by scoreless as the two couldn't get enough for takedowns. Then in the second Barnes was called for locked hands, followed by Route scoring an escape to go up 2-0.

In the final period Route continued to keep Barnes off balance, picking up two stall calls during but not enough to lose the match, winning 2-1.

"I didn't really think I would be in this position," admitted Route. "My goal was to make it to states and I made that goal, then I got the opportunity to wrestle in the finals and just made the most of it. It's a great feeling."

Route came back after a disappointing district tournament where he finished fourth.

"I definitely used that as motivation," he explained. "It kind of kicked in senior year, could be last I ever wrestle here and that just drove me."

Route wanted to set the pace early in the final match.

"Get a takedown in that match but that didn't happen," said Route. "He did real good defending me off. After the locking hands call I just coasted to the end."

He certainly has the respect of his teammate.

Now they are both heading to states together.

"We've always dreamed of the state tournament, going down to watch when you're younger," explained Route. "Now that it's come trueâ¦I can't even put it into words."

Down at the lightest weight Courtney's dream season continues.

He won 5-0 in the semi-finals then dominated the finals to the tune of 10-3 over Benton's Alan Diltz.

The freshman wanted to get his offense going right away and keep it going throughout.

"I wanted to open up the score," he explained. "Beat him by more, keep scoring points."

Courtney did just that, scoring a first period takedown to go up 2-0. He added another takedown in the second and added back points to go up 7-0.

Courtney would get an escape to start the third but Diltz got a takedown of his own to cut it to 8-2.

But Courtney had the last word, scoring another takedown to go up 10-2. Diltz escaped late to make it a 10-3 final.

"It could have been more," admitted Courtney.

His coach Dale Jarvis was definitely impressed with his freshman.

"Especially as a freshman it's very gratifying," Jarvis said. "He's a hard worker, he deserves what he's getting. Just the fact that he can come in here as a freshman and do what he did, it's a big, big accomplishment."

This all coming off appendicitis surgery over a month ago.

"It's because of his work ethic," explained Jarvis. "Coming off four weeks of not wrestling and then coming in against the weight class he did with five state ranked kids into it in sectionals all the way up through. It's just a real benefit he's wrestling the way he is."

Barnes also continued his district dominance in Regionals. He pinned his way to the finals where he beat Muncy's Dakota Nixon 5-1 to win his first title.

"It's pretty good," he said. "Last year I came up short. I just wanted to get a regional title under my belt. I've just got to look forward to states now."

While the score may not say so Barnes controlled the match, scoring a first period takedown to go up 2-0. He then added an escape and another takedown in the second to pull away.

"I felt like my confidence is high," he explained. "I knew there was going to be tough competition so I just had to wrestle hard for those six minutes and that would take care of itself."

Barnes kept Nixon defense throughout, keeping him scoreless until his escape in the third.

Two other locals in finals came up short in the finals, Sullivan County's Shawn Nitcznski at 126 and Troy's Dylan Brennan at 285, but will be moving on the PIAA tournament.

At 126 the match started scoreless with Nitcznski taking a 1-0 lead in the second with an escape. In the third period Central Columbia's Lewis Williams knotted it up at 1-1 with an escape of his own.

"I knew that what he did last weekend that the elbow pass, single leg was there," explained Nitcznski. "He got a couple times but I was able to defend it. I tried to work some of my stuff."

In overtime Nitcznski looked to have the winning takedown but the referees call him out of bounds.

"I thought I had him there," he said.

Late in the period Williams got a double leg on him and was able to get the sudden victory with four seconds left 3-1.

Despite the loss Nitcznski is glad to be going back to Hershey for the first time since his freshman year.

"It feels good," the senior said. "It's such a reward for all year."

He won the semi-final 3-2 to guarantee himself a spot.

"I knew it would be a lot easier to win that one than to come back through the wrestlebacks," Nitcznski said. "The pressure was off, I could just go out there and wrestle. Wrestle how I wrestle, don't have to worry about pressure."

At the heavyweight Brennan and GAR's Saul Wilkins ended the first period scoreless. In the second Wilkins was on top and used that to turn Brennan for three back points and a lead.

"It just got to me," Brennan explained about falling behind. "I wanted real bad to win that and it just got to me. I just didn't wrestle my potential."

Brennan would get a point off a potentially dangerous call on Wilkins followed by an escape to cut it to 3-2.

In the third he tried to go for the takedown but it was Wilkins getting the match defining two points. He would go on to win 7-3.

"It's pretty awesome," Brennan remarked. "In only my second year wrestling I think I've achieved a lot for myself."

He knocked off top seed Dalton Chilson of Wyalusing in the semi-finals 3-1.

"I just wanted to wrestle smart," he explained. "Don't do anything stupid. Stay good on my feet, keep moving, keep arms locked tighter. He's a great kid, I'm good friends with him and we've had a great match."

This is turning out to be a banner year for the Junior, going to states in football and now wrestling.

"It's a great achievement," he said.

Also going to states are Williamson's Trevor McWhorter (138), Otis (220) and Chilson (285) as they all took third at their weights.

McWhorter jumped out to a 3-0 lead on South Williamsport's Nathan Jones.

Jones fought back in the third, cutting it to 3-1 as McWhorter was called for stalling but couldn't turn the senior.

"I thought I was going to get the fall," McWhorter said. "I felt pretty comfortable, I just needed to stay smart and not give any cheap points up. I almost gave him some back points in the end but it all worked out."

"It feels good coming from last week when I didn't even know if I was going to wrestle for sure," remarked McWhorter.

Last week he had to carted off on a stretcher but there was no lasting damage and he was given a pass to continue his trip to states.

"It feels really good to be back and be able to wrestle at states," he added.

Despite the scare he didn't change his mind set at all.

"You can't wrestle differently because of one thing," McWhorter explained. "You just have to do the same thing you were doing and hopefully it works out."

Being in a third place bout last year helped him going into one this year.

"I knew how much pressure it is," McWhorter said. "I handled it a lot better than I did last year."

His teammate Barnes is excited to have him along.

It feels really good," he said about his teammate going. "Having someone from your school to go with you to push you during practice."

Otis wasted no time punching his ticket to states, pinning Montoursville's Ben Cerny in 2:37 for the win.

"It's a great feeling to go back to states," Otis remarked.

However, he wanted to come out of regionals as a champion.

"Regional third definitely not what I wanted," Otis explained. "Third place gets you back to Hershey."

Falling in the semi-finals motivated him for the consolation final.

"Every match is motivation," he said. "In my loss I didn't go out there to dominate and it showed."

Otis didn't make that mistake in the third place match.

"I came back and said I've got to dominate these kids," he said. "I was hungry for wins and I wasn't going to let anyone stop me from my goals."

His teammate Chilson will be joining him, a 3-0 winner of Towanda's Garrett Pratt in the 285 pound consolation final.

Chilson took a 1-0 lead in the second period off an escape then got a takedown off a Pratt shot late in the third to secure the win.

"I'm really excited to go down," the sophomore said. "I didn't have the chance to make it last year."

He and Pratt were matched up to start the regional tournament with Chilson edging him 2-1 in the quarters.

Going up was key for Chilson.

"I just stayed focused," he said. "Kept concentrating on what was what and did what I needed to do."

Now Wyalusing's heavyweight duo will be wrestling for a PIAA medal this week.

"We're real good practice partners together," he said. "It makes it that much easier to improve this week while I have the chance and I think I make Dylan that much better, too."

Benton won the team title with 82 points followed by Southern Columbia (60.5) and Montoursville (57).

The PIAA Class AA finals will begin on Thursday this week at the Hershey Giant Center.