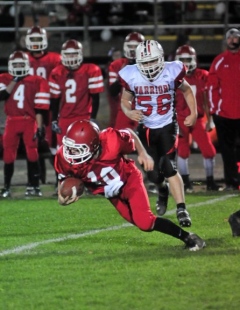 TROY - Friday's game at Alparon Park marked the 60th anniversary of the annual Old Shoe Game between the Troy Trojans and the Canton Warriors.

Both teams fought hard, but it was the home team that came out on top with a 23-8 victory, not only keeping the old shoe at home, but also earning them the NTL large school title (which they will share with North Penn) for the first time since 1988.

"I feel really good about how the kids played tonight," commented Trojan head coach Jim Smith after the game. "Canton showed up; they were playing really good football, but I was very proud of our defense. We've had some struggles the last couple weeks, and we've been working really hard at fixing it. They made some plays tonight against a confident team. As far as old shoe games go, it was a good football game on both ends. We didn't make too many mistakes and I'm really proud of our kids. It was a good, clean game."

The first quarter of the game was scoreless as both teams would trade punts for the majority of it. It wasn't until a few seconds into the second quarter that the fans saw some action. It would be Troy who would score first, on a short three-yard touchdown run from Ben Sherman. Nick Stephani added the extra point, and with 11:56 to play in the first half, the Trojans led, 7-0.

The Trojans would regain possession after recovering a Canton fumble, only to be forced to punt by the Warrior defense six plays later. Troy would answer quickly, also forcing Canton to punt, getting the ball back at their own 15. From there, Nick Stephani and Ben Sherman took turns carrying the ball, setting Troy up now at their own 30. A hand-off to Diante Jones would be all it took as he raced down the right sideline for the 70-yard score. With 3:57 left in the second quarter, Stephani would add the extra point, extending the Trojans' lead, 14-0.

Following this score, a 14-play drive on the part of Canton would send both teams into the locker room for halftime. Returning to the field for the second half, the Warriors were the first to possess the ball, but ended their drive with a punt.

From there, the Trojans received the ball at the Canton 20-yard line. The away team defense managed to hold every ball carrier to single-digit yards, but it wasn't enough. The Trojans made it close to the goal line, where Nick Stephani would attempt a 15-yard field goal and succeed, making the score now 17-0 with 6:07 to play in the third.

Again both teams would punt and Canton regained possession, hoping to redeem themselves. Unfortunately, a John Bowman pass would be intercepted on first and 10 by Troy's Kyle Jackson, and the Trojans' next drive would end the third quarter.

Canton put up their first and only points on the scoreboard to start off the final quarter of the football game. After a few key passes from QB John Bowman, the Warriors would set up at the Trojan seven yard line for a first and goal. Noah Barnett ran in the easy seven yards for the score with 8:07 left in the game. Instead of the PAT, the Warriors would go for the two-point conversion and add those extra points with a completed pass from Bowman to Malachi Washington, cutting the Trojans' lead to 17-8.

Troy would score once more on the night, with a 41-yard touchdown run from Chance Lantz with just over five minutes left in the game. This time, though, the PAT from Layton Calkins would fall short, setting the final score at 23-8.

The Trojans move on into post-season play next week as they will be the second seed and likely host Towanda for the first round of District 4 AA action, while Canton will likely be the fourth seed in Class A and travel to South Williamsport.