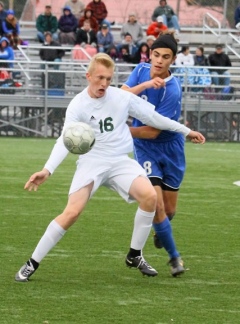 The Wellsboro boys advanced to the District 4, Class A boys' soccer quarterfinals with a 2-0 win over South Williamsport on Wednesday.

After a scoreless first half Sean Dooley put the Green Hornets ahead at 66:10 off a Tanner Runyan assist.

Wellsboro capped the win at 72:42 when Dawson Prough scored off a Josiah Hill assist.

"They boys played great tonight," Wellsboro coach John Shaffer said. "They are really starting to hit their stride. We dominated large chunks of the game and major credit goes to the South goalie, Sage Shaffer, who kept it nil-nil for most of the game.

"It was going to take something special to unlock the South defense and Sean Dooley sacrificed his body for a great header off Tanner's cross and then Dawson cut inside and hit the upper 90 with a blast. Our defense did a great job containing some very talented South players and I want to congratulate the back line and goalie on their 12th shutout of the year, a state acknowledged mark."

Wellsboro had 11 shots and seven corners and South had four shots and five corner kicks.

Wellsboro will take on Sayre, at a time and place to be determined, on Saturday in the quarterfinals.