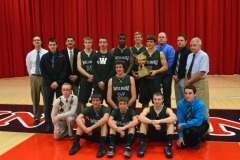 MANSFIELD - The Wellsboro Hornets claimed the NTL crown Saturday night by defeating the Towanda Black Knights by a final score of 56-47.

In each of the previous two meetings between the two schools Towanda had come out on top.

"We gave up the first two, but we knew the third time was the charm," Wellsboro junior Kieron Smethers said.

After falling behind 16-13 after the first quarter, the Hornets muscled their way into the lead with strong play under the basket, out-rebounding Towanda 43-29 over the course of the game.

Noah Wheeler led Towanda out of the gates, shooting 3-for-5 from three point range. Wheeler finished with 12 points on 4-for-13 shooting from three.

The first lead for the Hornets came at the 4:48 mark of the second quarter with Michael Pietropola hitting a pair of free throws to put Wellsboro up 21-19. Pietropola finished with 15 points and four rebounds.

Starting with a Smethers layup, Wellsboro put together a 7-0 run at the 6:30 mark of the third to begin to put the game away. Smethers finished the game with 10 points, 17 rebounds, and four blocks.

After trading baskets for the remainder of the quarter, Joey Doganiero hit a jumper to give Wellsboro a 39-30 advantage heading into the fourth quarter. Doganiero finished the game with 11 points.

Huff led Towanda with 19 points and five assists in the game.

Towanda struggled to penetrate the Hornets' defense and settled for outside shots for the rest of the quarter. They failed to find a rhythm offensively and finished the game shooting 6-for-36 from three point range.

For Wellsboro, Dawson Prough finished with eight points, Dylan Prough tallied 11 points and 12 rebounds, and Jake Mitchell chipped in with one point.

"The kids are peaking at the right time, and coming into districts, that's when you want to be playing your best basketball," Outman said.

Both teams await the start of districts, against opponents and at dates to be determined. Towanda is likely to host South Williamsport, while Wellsboro will likely be at Lewisburg.