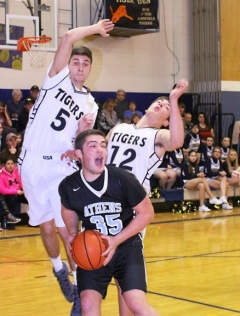 MANSFIELD - The North Penn-Mansfield boys stayed atop the NTL standings with a 90-50 win over Athens on Friday night.

Bo Burleigh led four Mansfield players in double figures with 23 points and Dayton Wood and Bryce Zaparzynski had 16 points each.

Jarrod Burd had 11 for Mansfield and Levi Christman had six points.

Luke Kelly had five for Mansfield and Konnor Manikowski and Shane Kelly finished with four points each.

Nathan Tice had three points for the Tigers and Joel Whittaker finished with two points.

Brandon Fauver led Athens with 21 points and Austin Lister had 11.

Joe Moyer and Tyler Forbes each had four for Athens and Patrick Cole and Austin Lane had three each, while Jarett Priester and Bill Bennett finished with two points each.

Mansfield is at Jersey Shore on Monday.

The Redskins held CV to 13 first half points as they built up an early lead en route to their NTL Small School boys' basketball win Friday.

Bryant Painter had 19 points to lead CV while Brandon McLean and Nate Bonham had six points each. Dakota Corwin netted four, Tyler Melko had two while Colton Vinluan added one.

The Green Hornets got 18 points, nine boards and five blocked shots from Kieron Smethers and Jake Mitchell had 13 points and eight boards in the win.

Wellsboro outscored Wyalusing 18-7 in the first quarter and then held on for the win.

Quinn Henry had five for Wellsboro and Dawson Prough had four, while Brandon Lamphier finished with two points.

Hunter Brewer, Ridge Williams and Kyle Tinna had three points each for the Rams.

Collin Fassett and Jon Morrison each had two points for Wyalusing.

Jeff Mitchell had a career-high 19 points and Kyle Kinsley had a career-best 13 rebounds, along with nine points, in the Waverly win.

Garrett Sutryk had 16 for the Wolverines and Zach VanHouten finished with 11 points.

Collin Traub had nine points for Waverly and Austin Blauvelt finished with one point.

Sutryk had six boards and Mitchell finished with four assists for Waverly.

The Wolverines are at Edison on Tuesday.

Josh Bradbury had 19 points to lead four Williamson players in double figures in the win.

Bradbury had a double-double, adding 10 assists and Nick Cevette and Brandon Schrader also had double-doubles.

Kyle Haight had 10 for Williamson and Collin Heilbrun had three, while Jon Daly finished with two points.

Byron Matthews had four for Canton and Matt Berryman and Auguste Gum had two points each.

Williamson is at CV on Wednesday.

The Griffins outscored CMVT 16-4 in the second quarter of the win on Friday.

Adam Szklanka had 16 points, six boards and four steals and John Saxe had 12 in the win, with six boards.

Taylor Baldwin had four points and Bobby Frank had three for the Griffins.

Beinlich finished with four steals for the Griffins.

Larry Hayla and Owen Petry led CMVT with nine each.

Liberty remained tied atop the NTL small-school standings with the win on Friday.

"NPLHS put together one of their best defensive games of the year, holding NE Bradford to 32 points before they hit a couple threes in the final minute," NPL coach Brian Litzelman said. "The game was close throughout and mid way through the fourth, NPLHS was able to open up a double digit lead, and make enough free throws down the stretch to get the win."

Liberty was led by Dillon Ford with 14 points and Ethan Aldinger finished with nine points.

Clark had eight boards and three assists and Aldinger had seven boards and a blocked shot.

Ford had seven boards and two steals and Upham had three steals, a block, an assist and three boards.

June had 12 rebounds and four blocked shots, with a steal and an assist.

Northeast Bradford was led by Jordan Goodwin and Nik Geiser with nine points each.

Michael Williams had seven for NEB and Austin Senn-Bishop had six points.

Goodwin had nine boards and Geiser had six boards, while Williams had four assists.

NEB won the JV game 45-29 with David Ford and Joby Leiser scoring 11 each.

The Crusaders hit 10 threes on their way to the win on Friday.

Darius Garvin had 22 points and Pat Brown had 12 points, with three threes.

Parker May and Joe Prunier each had 10 points, with May hitting two threes, and Derek Stark finished with nine points.

Kyle Minchin had six for the Crusaders and Louie Clearwater finished with five points, while Toby Werth had four and Justin Bauco finished with one point.

Kevin Harmer had 15 for Edison.

The Tigers got 11 points from John Dougherty and nine from Josh Kithcart in the loss on Friday.

Adam Zwierlein had six points and Parker Hendershot had five, while Sam Burns and Dylan Babcock finished with four points each.

Burns had 10 boards and Kithcart had six boards, while Zwierlein had two steals.

Devin Cooper and Brian Barrett had 17 each and Dekhari Stewart finished with 14.