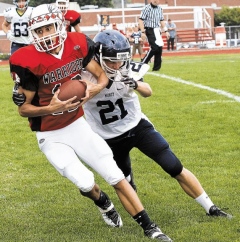 CANTON - Canton's defense may have had their best game of the season.

They held Muncy to 67 total yards in the first half and in the second half, if they allowed more yards they made up for it by forcing four turnovers.

But their offensive struggles were too much to overcome, totaling just 81 yards on the day, in their 14-0 loss to the Indians in NTL Small School football action Saturday.

Despite the setback Canton coach Jay Perry saw it as an improvement after last week's lopsided loss at South Williamsport.

Both sides struggled to move the ball offensively in the first half but Muncy was able to score thanks to some timely passing plays and good field position.

A promising Canton drive to start the game was stuffed at mid-field on fourth down, giving Muncy the ball on the 50 yard line.

From there the two teams traded 3-and-outs all the way through most of the first quarter.

The first big break came for Muncy late in the first when quarterback Coleman Good ran for a 19-yard gain straight up the middle to get to the Canton 44 yard line from inside his own 40.

Five plays later Good hit Abien Berry for a 10 yard gain down inside the Warrior 25.

Canton looked to have them stopped at the 18 yard line, forcing them into a fourth and four when the Indians went for it. They took to the air again as Good four Jeff Fry this time for 14 yards, good enough for first and goal.

Two plays later Good punched it in from four yards for a touchdown with 7:16 left in the first half.

Chris Titman added the point after to make it 7-0.

Canton's ensuing drive was another 3-and-out with Muncy taking over on Canton's 31 yard line after a good return.

The Warrior defense held strong, forcing another fourth down and seven yards, but Muncy went for it. Taking to the air again Good hit Berry for a 25 yard gain and another first and goal at the Canton 3-yard line.

Three plays later Good dove in from a yard out for the touchdown with 1:38 left in the half. The Titman extra point was good and Muncy led 14-0 at the half.

The game loosened up a little bit in the second half as the Indians came out strong.

After two good gains by Hunter Gardner Muncy gave it to him again and broke free in the open field. It looked like a sure touchdown but Malachi Washington ran him down from behind and stripped the ball at the 1-yard line.

It went out the back of the end zone for a touchback, giving Canton the ball on their own 20-yard line.

They were forced to punt again, though, and things went from bad to worse as Muncy got to punter Brady Bryington before he could get the kick off, tackling him down at his own 13 yard line.

Taking over it looked like the Indians were going get another six points but a fumbled snap by Good led to a Ryan Croft recovery. Croft ran it back past the 30 yard line before he lost it. However Washington was jonny-on-the-spot, picking it up and taking it to his own 45 yard line where it was first and 10 Canton ball.

Muncy would get it right back, though, as two plays later Warrior quarterback Michael Smithers' pass was picked off by Jordan King.

Canton returned the favor as Bryce Cole would pick off a Good pass on the ensuing drive.

The Warriors took over but once again found themselves unable to move the ball. On fourth down and 9-yard Smithers went deep but saw his pass fall into the arms of Fry for another interception.

Canton would get the ball back early in the fourth off a Muncy punt and used a Gavin Hoffman seven yard run on second down to pick up their first first down of the second half.

But a holding penalty got them off schedule and they were forced to punt again.

The Indians then went on a time killing drive of seven plays. It only went 11 yards but pushed the game clock to under four minutes when they punted.

A big return by Cole put the Warriors in business at Muncy's 12 yard line.

But on third down Smithers' pass to the endzone was picked off by Fry again ending the threat and Canton's last chance to score.

Washington led Canton on the ground with 32 yards on eight carries while Hoffman had 10 carries for 21 yards and Cole rushed the ball eight times for 19 yards.

As a team the Warriors ran the ball 31 times for 51 yards.

Through the air the freshman signal caller showed promise in his first varsity start but due to being behind was forced into throwing situations his coaches were likely hoping to avoid.

He finished the day 3-for-9 for 23 yards with three interceptions.

"We had to simplify the offense for him," admitted Perry. "But for a freshman he did a great job today. He had a lot of expectations on him, I think he has a lot of potential and I think he has a good future."

Byron Matthews had two catches for 17 yards while Cole had one reception for six yards.

Penalties plagued Canton as they were flagged nine times for 51 yards, with several holds hurting big gains, but with so many underclassmen manning key positions Perry liked what he saw from them.

"We see a lot of good things with young kids stepping up," remarked Perry. "Some of the seniors are doing their job leading these young kids."

Gardner led Muncy on the ground with 10 carries for 86 yards but 48 yards came on one carry.

Good had 11 carries for 36 yards while Cameron Good carried the ball nine times for 19 yards.

Through the air Coleman Good was 5-for-13 for 57 yards with two picks.

Fry was his top target with three catches for 22 yards while Berry had two receptions for 35 yards.

As a team Muncy finished with 159 yards rushinig on 39 carries.

After winning their first game of the season Canton has dropped three straight and things don't look any easier next week as they travel to Wyalusing.

"Offensively we've got to take it to the next level," said Perry. "We've got some guys coming back next week, hopefully we can at least hang in there with Wyalusing."