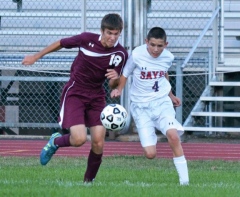 SAYRE - The Redskins scored two first half goals to pick up a 2-1 win over Northeast Bradford for their first win of the season on Tuesday.

"I told the boys before the game to be aggressive and to go hard to the ball. They won the majority of the 50-50 balls and got off some excellent shots," Sayre coach Randy Rockwell said. "The defense of John Blackman, Michael Shaw, Alex Krall, Dominic Petrocco, Chris Keefer and Devin Kithcart played an outstanding game for us which helped us get some good offensive runs started. I am happy where we are as a team. After a very tough start to the season the boys have worked hard and they deserved this win I am proud of all of them."

Jordan Rockwell started the scoring at 30:27 of the first half and with 34 seconds left in the half Sam Wheeler found the net for the Redskins.

Jude Jampo scored with 12:50 left in the game for NEB to cut the deficit to 2-1, but that's as close as the game would get.

Adam Cole was in goal for the Panthers and Jalen Powers was in net for the Redskins.

Jacob Singer had a pair of goals for the Green Hornets in the win.

At 6:09 of the first half Galeton got a goal from Julian Martinez to make it 2-1 at the half.

In the second half at 34:06 Cam Tennis scored off an assist from Tucker Worthington.

Casey Hoover had three saves for Wellsboro and David Steadman had nine saves for Galeton.

"I'm proud of how the boys responded to adversity tonight," Wellsboro coach John Shaffer said. "We scored three scrappy goals and then went down a man with 24 minutes still remaining in the match. The boys rallied together. Our depth really helped tonight.

"We pulled off some of our artists and had soldiers ready to defend and we saw the game out in a very professional manner. Great work by the back four tonight and our goalie. Jake Singer put himself in the right spots to score tonight."

Connor Bayne had a hat trick as the Crusaders picked up an IAC boys' soccer win Tuesday.

Nick Steed added two while Rocco Coulibaly had one.

Will Brennan had a save for Notre Dame while Dante Rynone had 20 for Newfield.

The Crusaders will face Trumansburg in an IAC cross-over game Thursday at home with a 4:30 p.m. start.

Callum Caplan had a hat trick as the Wolverines picked up the IAC boys' soccer win Tuesday.

Caplan scored on a header from Grant Caplan to start the game. Then with two minutes to play in the first half Liam Murphy deflected a Dawson Morey pass into the net to make it a 2-0 halftime lead for Waverly.

In the 56th minute Caplan hit a penalty kick then added his final goal unassisted.

"Waverly has begun to overcome its Achilles heal which has been playing on opponents' fields," Waverly coach Joseph Picco said. "We have much to work on and will get right back to it tomorrow on the turf. We have seized every opportunity to this point but we need to remain focused."

Ryan Segar had a hat trick to give the Wildcats an NTL boys' soccer win Tuesday.

Segar had his first goal with 29 seconds left in the opening half.

Taite Couch and Jason Kshir combined for 11 saves for the Mountaineers while Braden Priester had one save for Athens.

North Penn-Liberty is at Troy Thursday.

Collin Binford had five goals and two assists to lead the Trojans to an NTL boys' soccer win Tuesday.

Jacob Williams added a goal and three assists while Carlos Polanco also had a goal.

Caden Murray and Hunter Kendall both notched their first varsity goal in the contest for the Trojans.

Matt Graybill had two assists while Dane Smith added one.

Jarod Boardman scored for Towanda on a penalty kick.

Troy won the JV game 3-2 behind two goals from Jeremiah Williams and one from Kendall. Zach Sims had two goals for the Knights.

The Warriors got goals from Matt Dodson and Zane King in their NTL boys' soccer win Tuesday.

"We had a little trouble creating space in our offensive third tonight but every other part of our game was played extremely well," said Williamson coach Mark Gee. "We moved the ball from our backs to our kids with great accuracy and pace tonight and found some holes in their defense, but our forwards were a step early a lot tonight, we were called offsides seven or eight times, something we will work on tomorrow at practice. Overall probably the best game we have played, just couldn't connect on the last pass. We have a big game at home versus Wellsboro on Thursday."

Wyatt Gorg made one save in goal for the Warriors while Frank Gardner had 13 saves for the Panthers.

The Griffins cut the deficit to 2-1 with 13:24 left in the game, but that's as close as they got on Tuesday.

Max Morrison put Southern Columbia up 1-0 42 seconds into the game and with 23:15 left in the game Zac Consentino made it 2-0 Tigers.

Evan Lewis scored on a penalty kick for the Griffins with 13:24 left, before Consentino capped the scoring for the Tigers with 4:57 left.

Spencer Gordner had six saves and Dane Carpenter had one for the Griffins and Tyler Comachik had six saves for Southern Columbia.

The Griffins are at South Williamsport on Thursday.