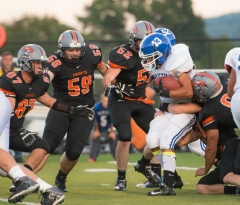 TOWANDA - Friday night's matchup was a roller coaster ride for Towanda fans as well as South Williamsport ones.

Fumbles, penalties, interceptions. These things would cause both teams to take some steps backward.

Touchdowns, two-point conversions, kick returns. These would push one team past the other.

Missing a star player this year, the Mounties might have been underrated. However, after receiving the kickoff, and with 16 seconds gone from the clock, they would put the first seven points up on the board with a 68-yard touchdown run from sophomore Ashton Martin and a extra point from Kyle Betz.

A seemingly stunned Black Knight offense would gain only 16 yards on two carries from Steven Yates, punting on fourth-and-13 on their first possession of the night.

The rest of the first and most of the second quarter would be wiped from the clock uneventful, until the Knights decided to answer back. On third-and-seven, Towanda quarterback Brandon McLinko found teammate Charles Watkins for a catch-and-run into the end zone, cutting South Williamsport's lead to 7-6 with 2:53 left in the half. Tyler Basse's extra point attempt was no good, and the Mounties held on to their lead.

It wouldn't be until seconds before the end of the half that someone would score again. On second-and-10, McLinko would complete a 14-yard pass to Steven Yates, who would race the remaining 45 yards into the end zone for the points. A failed two-point conversion attempt would still allow the Knights to lead, 12-7.

The Mounties would retaliate late in the third quarter, with a touchdown pass from sophomore QB Tommy Dunkleberger to fellow sophomore Gideon Green. Betz's extra point was good, and South Williamsport again took the lead that was theirs, the scoreboard now reading 14-12.

Towanda struggled with interceptions throughout the game, and first-and-10 of the Black Knights' next possession would be no exception. A McLinko pass would fall into the arms of South Williamsport's Nate Koletar, setting the Mounties up at the Towanda 21-yard line, where a few Koletar runs would create a fourth-and-goal on the 6. Dunkleberger would then complete a short and sweet pass to teammate Chevy Bolay for the touchdown with three minutes to play in the third quarter. Betz's PAT was again true, and South now led 21-12.

The Black Knights didn't even bat an eye. Instead, they answered right back on a kick return for a touchdown and the crowd went wild. Yates' 77-yard run was good enough for six points, and after a Tyler Basse extra point, Towanda pulled up right behind South Williamsport, 21-19.

For the Knights, the scoring didn't end here. On their next possession, they would waste no time pulling ahead. On second-and-three with 17 seconds remaining in the third, Keegan Kisner would complete a 23-yard touchdown run up the right side. Basse would add the extra point, giving Towanda a five-point lead at 26-21.

This game of back-and-forth continued into quarter four, but this time South would take the lead once again. Gideon Green and Nate Koletar would take turns plowing through the Black Knight defense before setting the Mounties up at the Towanda 24-yard line. Koletar, pushing past defenders, would sprint up the right sideline and into the end zone for the score on fourth-and-one. South Williamsport would yet again take the lead, even with a failed two-point conversion attempt with 3:33 left in the fourth, the scoreboard now reading 27-26.

The last three and a half minutes of the fourth quarter proved to be the best. Another interception from the Knights and a turning over of the ball on downs on behalf of the Mounties would set Towanda up on their own 28, where McLinko would toss the football into the air, only for it to be caught by Nate Koletar, who would easily race the 20 yards needed for a score. Betz's PAT rang true, and with 1:27 left to play, South led 34-26.

It would only be a matter of 25 seconds before the Black Knights would score again, tying the game, the possibility of overtime hanging in the air. On third-and-10 on their own 42, Brandon McLinko would complete a touchdown pass to Steven Yates with the clock reading 1:02. A two-point conversion attempt would be successful, thanks to another McLinko pass, this time into the hands of William Davidson to even out the score.

Overtime was inevitable. Both teams would get a possession, the first being the home team. The Knights' fight did not waiver even though they couldn't get into the end zone. Instead, a Tyler Basse field goal would be the thing to bring the score to 37-34 in favor of Towanda.

Unfortunately, though, this would not be enough. South Williamsport took things to the next level when given their possession. Nate Koletar would again be the one to score, running left for a short 4-yard touchdown, setting the final score at 40-37 in one overtime.

Next Friday, the Knights travel to Bloomsburg for week three to take on the Panthers.