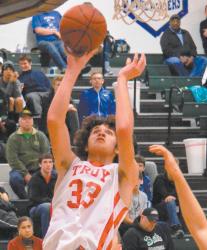 Seton jumped out to a 17-7 first quarter lead but Troy hung tough in the second, holding Seton to seven points to keep it an 11-point deficit at the half.

A 14-8 third quarter put Seton up 35-21 going into the fourth quarter. The Trojans outscored them 14-7 but it wasn't enough.

Anthony Dietrick had 10 points and eight boards to lead Troy while Alex Butcher had seven points and nine rebounds.

Loyalsock had 10 players score to win the tournament title.

Canton was led by Ridge Moore with 13 points and Byron Matthews with 10 points.

Jacob Aumuck had three points for Canton and Michael Smithers had two points.

Andrew Muggleton had 12 and Hunter Webb 11 for Loyalsock.

Jon Baker had 18 and Matt Dodson and Colin Heilbron had 14 each for Williamson in the win.

Brandon Seip had five for Williamson and Andrew Hackett had two points.

Liberty got 14 points from Gunnar Rice and 11 from Tyler Boyer.

Vince Bova had nine for Liberty and Tanner Zeafla had four, while Tyler Repard had three and Cole Winder had two points.

The Tigers held off a late Deposit charge to pick up the non-league boys' basketball win Wednesday.

Tioga led early and pushed the advantage to 54-35 after three quarters. Deposit rallied in the fourth, outscoring them 19-11, but the Tigers held them at bay.

The Green Hornets were within three at the half at 28-25, but Lewisburg outscored Wellsboro 21-9 in the third quarter to pull away for the win.

Dalton Prough led the Green Hornets with 13 points and Jacob Singer had 11, while Dawson Prough and Quinn Henry both added 10 points.

Collin Pietropola had four points for Wellsboro and Brandon Lamphier had two, while Nic Ingerick and Alden Weiner had one point each.

The Panthers outscored Mt. Carmel 39-22 in the second half of the win.

Tommy Rought had 19 points and seven boards for the Panthers and David Ford had a double-double with 13 points and 10 boards.

Garret Smith had 11 points and six assists and Nik Geiser had 10 points and seven assists in the win.

Nate Chilson had nine points for the Panthers and Michael Walitsch had four points, while Nate Watkins and Austin Senn-Bishop had three points each.

Northeast Bradford is at Tioga at 1 p.m. on Saturday.

Jon Morrison had 23 points and Ridge Williams had 16 as the Rams outscored Spencer Van-Etten 20-4 in the second quarter of the win.

Keshon Gardner had eight points for Wyalusing and Will Martin had seven points, while Hunter Brewer had four points and Chandler Brown finished with two points.

Williams and Gardner each had three assists, with Gardner adding two blocks and Martin had two assists.

Morrison and Gardner had five boards each and Hunter Brewer had four rebounds.

John Saxe had 24 points, including the go-ahead shot with 18 seconds left to help the Griffins stay unbeaten.

Down one with 18 seconds left Saxe hit a floater to put Sullivan County ahead. Hughesville was fouled with two seconds left, but missed both shots.

Hughesville went up 40-33 in the game, but Sullivan County answered with a 12-4 run to end the game and get the win.

"It was just a really good response from my team," Sullivan County coach Glenn Vaughan said.

Lucas Schultz had nine points for the Griffins and Taylor Baldwin and Jordan Pedro each had four points, while Alex Baumunk and Jon Pedro had two points each.

Trent Wolcott had 11 to lead Hughesville with 11 points.

Sullivan County is at South Williamsport on Tuesday.