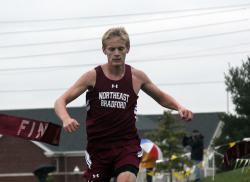 BLOOMSBURG — Northeast Bradford's dominance at the Class A level in District IV continued in the cold and soggy conditions Thursday.

Casey Ellis (16:59) ran away with the individual title, Garret Smith (17:20) out kicked Southern Columbia's Ethan Knoebel (17:22) for second and the Panthers took four of the top 10 spots with all five scorers in the top 12 to put their fifth straight team title away.

"Really good, really good, all the hard work has paid off," an excited Ellis remarked after pulling away for his win.

The only runner more thrilled than Ellis when he crossed the finish line may have been his teammate Smith.

The senior held up two fingers for taking silver then pumped his fist with a triumphant shout.

"It feels great to just continue on what we've been doing," Zak Smith said about the title. "Working hard, keep it going."

"It feels great as a team," Ellis said about the title. "We have a great program, a great history."

Coach Mike Murphy was glad to see his runners still have an edge when it comes to districts.

"Sometimes you get complacent or you come to expect certain things," he explained. "We run pretty well here. We've always run pretty well here. Southern Columbia was on the radar earlier, they were runner-up at Foundation. Some other results seemed to indicate we had them covered but we had to execute today and I think those guys did more than execute really."

Murphy noted that Garret was as close to Casey as he's been this season and all the way down to their sixth, Moore, they all had their best days.

"Destin was really close to our fifth," said Murphy. "That's what were going to need for sure."

They had to shake off a cold morning, even for the district championships.

"Once the race started we all said we all felt good," explained Zak Smith.

Ellis and Knoebel went out even for the first half of the race but at the far end, the first time around the fields, Ellis made his move for the lead and never looked back.

"I figured Ethan and (Hunter) Crawley would go out in front," explained Ellis. "So I figured to stay a little bit behind them and a little after the mile to drop the hammer. I sticked to that game plan."

With the hammer dropped, Knoebel could only try to hang on, which he did for the second mile but by the third he was fading fast while Ellis was able to kick to the finish to go sub-17.

"I just surged for three minutes," Ellis remarked. "Good enough to get a lead."

Not a bad day for somebody who took up running a little more than a year ago.

But Ellis put in enough miles this summer to fill a 4-year career and it has gotten him a district title.

"I knew I had a chance," he said about getting the gold. "I knew it would be tough but it feels great."

"Casey's super fit, he's super gutsy," described Murphy. "He just opened up the gap from about a mile on and that was it."

Defending district champion Crawley of South Williamsport was injured and didn't factor into the race for gold.

"We had a race strategy that we had been working on for a week to race against Hunter Crawley," said Murphy. "He wasn't even there."

Garret used Ellis as part of his game plan.

"I wasn't going to be right behind him but I wanted to keep him in my sights the whole race," explained Smith.

He ran with Southern's number two Nicholas Kuzo (17:35), who finished fourth overall, for most of the race before surging late to catch and pass Knoebel.

"We knew Ethan and Casey were sort of similar, then the second man was just like me so we decided to just stick to each other," he explained.

Then with Kuzo safely behind him, Smith made a hard kick for Knoebel once he made the final turn before the home stretch.

"My adrenaline kicked in and I booked it," he said. "That felt great."

Garret's coach has noticed his renewed commitment this season.

"He's been working really hard this year," said Murphy. "He's very focused. I can't say that cross-country is his favorite sport but he loves to win and he knows what it takes to win so he's really been putting the work in. I'm always happiest for the kids who work the hardest and get results."

The rain made the course a little slick, especially down the few hills.

"We made sure we watched our footing on the turns," Zak Smith remarked.

But no matter how careful runners are, falls do happen in wet conditions.

"The footing was terrible," Senn-Bishop remarked. "Zak went down twice. I had to help him back up. I almost went down, too."

"I was going really slow down the hills," added Mosier. "Just trying to not mess anything up for states."

Murphy felt Mosier had a good race to round out the top 10.

"I felt good, I went out a little conservative," he said. "Well, it felt conservative but it was fast. I was 20th place at the mile mark."

That was a little further back than he wanted but as the race went on, the other runners dropped.

"I kept going as the others slowed down," Mosier explained. "They went out too hard."

Senn-Bishop used familiar faces as reference points during the race.

Murphy feels his team is peaking at the right time as they get ready for the PIAA Championships down at Hershey next Saturday, especially compared to last year's team at this point.

"I think health-wise we're really healthy," he remarked. "Focus-wise they're pretty good. Unfortunately the state is a little more competitive in single-A. I think if you put the two teams head to head, this one might beat last year's team but as far as in the state we have our work cut out for us."

Going into states Ellis is going to continue to do what has gotten him here.

"Keep on working hard," he said. "I have a game plan for states, too, though. I will go out and try to execute. If the team does good we have a shot at another state title."

This will be Garret Smith's fourth trip to states. As a freshman he state medaled but the last two years he's come up empty. This year he wants it all.

"A state medal," he said. "First place (as a team), maybe second place. We've got to beat out that third place the last three years."

Mosier is hoping to just have a good race at Hershey.

"I've had a pretty bad last two years at states," he admitted. "I didn't come in really where I wanted to so this year I'm going to go out a little bit smarter and work the hills. That is my weakest point."

For Garret, Ellis and Senn-Bishop this state meet will be their last.

"I am going to try to go as hard as I can," said Senn-Bishop. "I am trying to get my body in as good a shape as I can. Trying not to push too hard or get any injuries, try to run a little harder come states because it's my last race."

As for Murphy, he's going to enjoy this district title just like all the others.

"You never know which one is going to be your last."