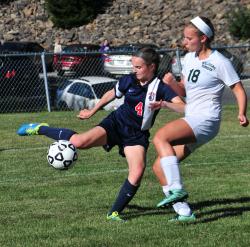 "It was tough to adjust to a small field," Sayre coach Tracy Mennig said. "The girls played well possessing the ball and trying to open the field up."

The Redskins opened the scoring in the first half as Chloe Tracy found the back of the net off an Abby Moliski pass.

Then 10 minutes into the second half Kate Cron scored off a Tracy pass. 10 minutes later Cron got her second goal off a steal.

The final Sayre goal came with 4:50 left to play as Tracy scored off a Kirsten Covey pass.

Sayre out shot them 37-7 while Wellsboro had a 3-1 corner kick edge.

Becca McNamara made two saves in goal while Kailee Clymer had eight saves for the Hornets.

The Griffins improved to 4-0 on the season as they earned a Mid-Penn League girls' soccer win Monday.

Kaiti Beinlich had both Sullivan goals with Macy McCarthy getting the assists.

Bethany Weinhardt made eight saves for the Griffins.

Sullivan is now 4-0 on the season.

The Panthers rattled off three straight goals to pick up the NTL girls' soccer win Monday.

Katy Jefferson scored off a Jenna Jacobs at the 17:37 mark of the first half to put NEB up 1-0.

Williamson's Madi Lee then scored to knot the game up at 1-1.

Roughly halfway through the first half Leighann Vanderpool gave the Panthers the lead back off a Karissa Cowles assist.

Ericka Vough then made it 3-1 10 minutes before the half off a second Jacobs assist.

Kara Brown had the only goal of the second half.

Kiah Russell had three saves for NEB while Keira McCormick made seven stops for Williamson.

"I was very pleased with how our girls played tonight," said NEB coach Larry Jennings. "Playing on a Monday is always a challenge for us but the girls stepped up and played well. I was also impressed with the Williamson team. They played a great game."

Riley McClellan and Brooke Ward both had hat tricks as the Trojans picked up an NTL gilrs' soccer win.

McClellan had four goals and two assists while Ward had three goals and three assists.

Brooke Loveland scored once while dishing out two assists.

"Troy took control from the first whistle and kept possession of the ball a majority of the game," said Troy coach Corey Johnson. "I was proud of the way the team passed the ball and moved it up and down the field under control and they set the tempo of the game. Our defense stepped up. The team is really starting to click and are working together."

Alaina McKee made 32 saves for the Tigers while Brianna Rathbun had the clean sheet for Troy.

Troy won the JV game 2-0 on goals by Marissa Bulkley and Katie Case.

Six different players found the back of the net for the Wildcats in their NTL girls' soccer win Monday.

The Wolverines controlled possession as they picked up an IAC boys' soccer win Monday.

Five minutes into the game Liam Murphy scored off an assist form Conner Joseph. Then at the 11 minute mark Joseph scored off a Grant Caplan helper.

Five minutes later Brenton Frisbee scored off a Joseph assist to make it 3-0 at the break.

In the second half Joseph found the back of the net again off a Jake Serafin assist.

Frisbee then got back to back goals for the hat trick, the first off a Murphy assist and the second one off a Caplan helper.

Waverly out shot Watkins Glen 26-6 and had a 6-2 edge in corner kicks.

Despite the strong showing on the scoreboard it wasn't all easy for Waverly as Watkins Glen had set up an offside trap that caught the Wolverines a couple times.

"We sat down during halftime and discussed how to best play through and out of the situation and it paid dividends in the second half," said Waverly coach Joe Picco. "We only had one offside call."

Lucas Shultz had a hat trick but it wasn't enough as the Griffins fell short in boys' soccer action Monday.

South struck first but Shultz knotted it up with a penalty kick.

Back to back South goals gave them a 3-1 lead but Shultz's second goal just before the half cut it to 3-2.

South got an early second half goal to go up 4-2.

Shultz's final goal came late in the game to make it a 4-3 final.

South out shot Sullivan 17-5 and had a 6-1 edge in corner kicks. Spencer Gordner made 13 saves in goal.

The Griffins fall to 0-4 on the season.