Wyalusing picks up two wins to stay unbeaten in NTL. 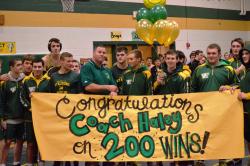 His father and head coach Gary Haley earned his 200th career victory against NPL as well.

In the first match-up the Rams won 13 of the 14 weight classes.

Creighton pinned Gavin Lundy-McCutcheon in 2:55, Collin pinned Matthew Ingrassia in 5:02, Porter pinned Damon Whipple in 1:05 and Otis got the fall over Dominic Red in 21 seconds.

The best match of the day was at 220 where Canton's Brady Bryington edged Mitch Peters 5-2.

Bryington used a first period takedown to go up 2-0 followed by Peters cutting it to 2-1 with an escape.

Bryington got an escape to start the second period to go up 3-1 followed Peters getting an escape in the third to cut it to 3-2.

Bryington defended a Peters shot in the third and spun around for the takedown and win.

"Both guys worked pretty hard through the match," Towanda coach Bill Sexton said. "Both were working to score. It was easily the best match of the night."

Towanda will host NEB next Thursday in a turn back the clock night.

Both teams will be wearing vintage uniforms from the 1950's.

The Black Knights will also be going for program win 800.

The Griffins had five wins on the mat in their HAC wrestling loss Thursday.

Mikel Houseknecht (120) scored a 12-5 decision over Alex Snyder while at 170 Dylan Ammerman earned a forfeit.