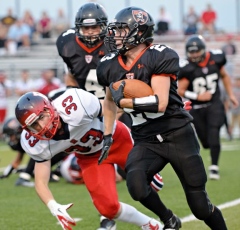 TOWANDA - Depleted by graduation and injuries to key players, an inexperienced Black Knight squad fought valiantly but dropped a 26-0 decision to the visiting Binghamton Patriots at Memorial Field last night.

Facing their second tough, non-league opponent in as many weeks, Towanda dropped to 0-2 and will have to re-group as they travel to Athens next week for their NTL league opener.

Binghamton got things going early, pinning Towanda deep in their own territory. On 4th and 10 from their own 10-yard line, a short punt gave the Patriots great field position at the Black Knight 25. It would take them only five plays to cover that distance, with quarterback Andre Yevchinecz finding wide receiver Dan Jeffery for a three-yard touchdown pass and an early 6-0 lead at 2:55 of the opening quarter.

The Black Knights would mount a nice drive of their own, taking the ensuing kickoff and traveling 48 yards in nine plays. But a first down pass attempt by Noah Huff was intercepted at the Binghamton 25, ending the threat. The Patriots would make them pay, as they traveled 75 yards in 11 plays, culminating with a 7 yard burst up the middle by sophomore running back Dan Sellepack for the score. Joe Ruggiero added the PAT, and at 7:33 before half Binghamton led 13-0.

Towanda's next drive ended with a fumble, and Binghamton would again make them pay for their mistake, traveling 46 yards in eight plays, with Sellepack again busting up the middle and racing untouched 32 yards for the score. Ruggiero added his second PAT, and the Patriots went into halftime up 20-0.

The Black Knight were unable to mount any consistency on offense in the second half, as they were forced into several three-and-outs. Binghamton put together one final scoring drive at the end of the third quarter, traveling 62 yards in 13 plays, with Yevchinecz taking it in himself from two yards out to close out the scoring at 26-0.