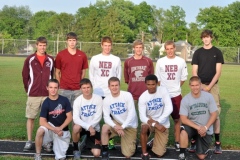 After missing out on a chance to win a state title in his marquee event, the 1600 meters, Northeast Bradford's Curt Jewett came back to cap off his high school track career in the 800 meters at the PIAA Championships in Shippensburg.

For his efforts this year Jewett is The Daily & Sunday Review All-Region track athlete of the year.

Sayre's Lucas Murphy in the pole vault and Athens' Ryan Kreykenbohm in the shot put each finished ninth at states and are the co-field athletes of the year.

Towanda's Joel Miller qualified for states in the high jump in his first year in the sport and he is the newcomer of the year.