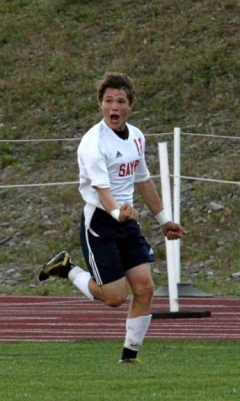 SAYRE - The Redskins added to their lead in the NTL race with a 5-0 victory over Galeton on Tuesday.

Sayre opened their scoring at the 16:20 mark of the first half when Seth Murrelle capitalized off an Adam Moore feed.

Sayre continued their aggressive play with Tyler Eaton scoring at the 13:39 mark off a cross from Murrelle to make it 2-0 at the half.

The second half remained scoreless until 19:34 when Rowe, with his back to the goal, managed an unusual and outstanding heel shot past the Galeton keeper for Sayre's third goal.

Just 81 seconds later Murrelle scored unassisted to make it 4-0 and with 47 seconds left in the game Murrelle crossed a deep ball from the 18 to Eaton.

"Once again our defense, composed of Alton Frantz, Juan Velaszquez, Cuyler Kochin, Mitchelle Ward and John Northrup played an outstanding game, shutting down the Galeton offense and feeding the ball to the midfield and forwards who utilized excellent passing and communication to control the pace of the game."

Sayre had 26 shots and four corners and Galeton had seven shots and no corners. Giuseppe Scavone had four saves for Sayre and James Sunderland had 16 for Galeton.

The Wildcats got a goal on a penalty kick from Shane Colegrove and that was all they would need to get the win on Tuesday.

Athens had 10 shots and three corners and Williamson had three shots and two corners.

Neil Carpenter had three saves for Athens and Kyle Colegrove had nine for Williamson.

The JV game ended in a 2-2 tie with Austin Lane and Kevin Stedge scoring for Athens.

Athens is at Galeton on Thursday.

Jared Murray had a hat trick for Troy in the win on Tuesday.

Collin Binford had two goals for Troy and Dane Smith, Evan Polly, Jake Havens and Kyle Knapp all had goals in the victory.

Polly had four assists for Troy and Smith, Thomas Swain, Bradin Heimbach, Jason Essaias and Chris Smith finished with assists for the Trojans.

Tyler Basse scored on a direct kick from 45 yards out for the Black Knights goal.

Trevor Ward had two saves for Troy and Devin Patel had five saves for Towanda.

Dan Brooks scored a pair of goals in the win.

Erik Stemcosky started the scoring at 28:48 off a Josiah Hill assist and at 35:11 Joe Allen scored off a Brooks assist.

At 74:57 Austin Haskins scored off a Sean Dooley assist.

Wellsboro had 23 shots and seven corners and NEB had 16 shots and six corners in the game.

"The win was a complete team effort," Wellsboro coach John Shaffer said. "We are battling a couple injuries and every player stepped up their game tonight. We had kids get their first varsity goal or assist and a JV player debuted at center back and played great, the future is bright. I was very happy with our passing against a very aggressive Northeast team. I hope we can recreate this performance tomorrow night (against Towanda) for senior night."

Dalton Litzleman scored a pair of goals in the victory on Tuesday.

Litzleman scored at 18:12 of the first half as his corner kick went directly into the net.

At 27:04 of the second half Litzleman had his second tally of the game.

Drake Schmouder had five saves for Liberty and Frank Gardner had one save for Northern Potter.

Liberty hosts Williamson in their homecoming game on Thursday.

Kirsten Colegrove had a pair of goals in the victory on Tuesday.

Rachael Donnelly started the scoring at 30:18 off a double assist from Mackenzie Hafer and Emily Casterline and Colegrove scored at 5:54 of the first half and 39:46 of the second half.

Athens had 22 shots and five corners and Towanda had two shots and two corners.

Morgan Westbrook had two saves for Athens and Kylie Garris and Marissa Paulish combined for 16 saves for Towanda.

Athens is at Mansfield today.

"We substituted a lot of girls and let them play freely tonight," Athens coach Duane Hafer said. "We moved girls around and I thought we did a good job moving girls around and into new positions."