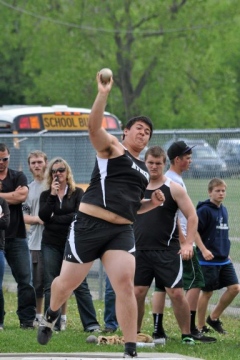 ATHENS - Last year the NTL Large School title came down to the final event, an exciting 4x400 race that saw Towanda edge Athens for the title.

This year the new overall NTL title came down to a single event again but this time it was the shot put throwers on display.

Towanda went in with a 5.5 point lead and had two throwers seeded fourth and fifth. The Wildcats had the top seeded thrower but needed someone to step up.

That someone was Scott Laidlaw.

"It was so exciting," Laidlaw remarked. "I was pumped. I was pumped all day. That was a great confidence booster. I hit that and I knew I could hit even bigger throws. It helped a lot to get the big throw early."

That was good enough for second with teammate Ryan Kreykenbohm taking first at 50-feet, 5 1/2-inches and this time around it was the Wildcats edging the Knights 138.5 to 133.

"Not very often do you see the meet come down to the big guys," Athens coach Dave Gabriel said. "It was great that they were in the spotlight. Scott (Laidlaw) put out that first throw and it was like he was saying 'there it is come and get me.'"

Even Kreykenbohm was impressed with his training partner's toss.

"It was great that he had that throw," he said. "It was a great way to start."

However, he wasn't about to be out done.

"I was not going to let him beat me," Kreykenbohm remarked. "I had to have a big throw after that. I push him to PRs and he pushes me to PRs."

The senior made it a point to get over 50 feet again.

"I think some people thought when I did it earlier this year it was a fluke," Kreykenbohm said. "I showed it wasn't a fluke."

Typically the throwing pits are surrounded by coaches and parents but this time they had a large crowd wrapped around their small corner of the stadium.

"It felt great throwing in front of a crowd," Kreykenbohm said. "Usually it's just our parents out there watching. The throwers are usually the unsung heroes, it's great it came down to us."

Even before the meet ended they knew it was going to rest on their shoulders.

"We knew it was going to come down to us," Laidlaw said. "We were talking about it after we didn't win the 4x4 that it was down to us."

"It was great it came down to the throws," added Kreykenbohm. "It usually comes down to the 4x4."

Wyalusing's Jeremy Allyn took third at 57-feet, 10 1/2-inches, Canton's Will Unruh was fourth at 47-feet, 8-inches followed by Towanda's duo of Jim Tice (46-feet, 6-inches) and Evan Madill (46-feet, 1/2-inch). Both Black Knight throwers did better than their seeds but couldn't make up the distance to break up Athens' top two.

In a meet decided by five points Athens had eight eighth-place finishers. Getting those key eight points was key for the Wildcats.

"Depth is definitely a huge thing, especially at a meet like this," Gabriel said. "We knew Towanda was a deep team. I love the rivalry. I love the passion that Towanda brings to the sport. With the 10 team format I didn't know how it would look. We looked at the seeds and we had a 60 point swing we needed to make up from the seeds. We had a lot of PRs, a lot of big performances."

After losing it last year they were excited to pull it out this year at their stadium once again.

"To do this on our turf, that's nice," Gabriel said. "It was tough to watch last year. We thought we had a the right equation to win last year."

Being able to do this at home meant a lot to the Athens athletes.

"This feels really good to do this in our last home meet," Kreykenbohm said.

The event that may have stolen the show, though, was the 4x800 relay as Northeast Bradford loaded it up to set another school record. They not only set a new school record but also a stadium record, running a 7:58.13 to win.

Colton Snyder led off followed by Brandon Devonshire, Sam Williams and Curt Jewett. Halfway through the race the Panthers were on a pace for 8:04 when Williams ran a personal best 1:59 and Jewett finished with his own PR of 1:55 to bring them under.

In the 100 the top time coming out of the preliminaries was Northeast Bradford's Isaiah McPherson's 11.24 but in the finals he was called for a false start.

In a jump off Sayre's Lucas Murphy edged Athens' Sam Vergeson in the pole vault. Both tied at 12-feet, 6-inches but it was Murphy vaulting 12-feet, 9-inches to get the win.

Allyn won the discus and the javelin.

All the teams will be competing at the District IV Championships next Saturday at Susquehanna University.